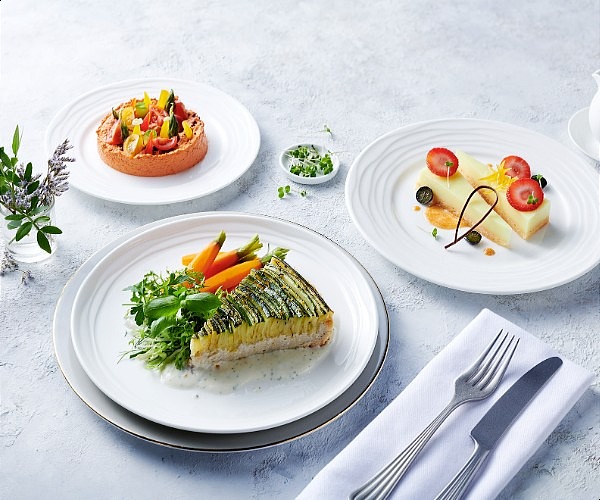 From its UK origins in 2014, the concept of ‘Veganuary’, a month-long initiative promoting the vegan diet, has continued to garner interest amongst the general population. In fact, Emirates has noted a 154% increase in vegan meals served onboard between 2021 and 2022, with over 280,000 plant-based meals consumed in the past year.

Currently Emirates offers more than 180 recipes catering to vegan passengers or those looking for a healthy meal onboard, and has been serving vegan meals since the 1990’s. Initially, vegan requirements were focused on specific routes such as Addis Ababa where vegan meals are required during certain times of the year by those practising the Ethiopian Orthodox faith, or across the Indian subcontinent where multiple faiths encourage a plant-based diet. Over recent years however, vegan dishes have been rapidly gaining popularity on US, Australian, some European and UK routes, with Emirates noting a sizeable increase in interest in vegan dishes over the last decade. Routes showing recent increasing interest in vegan meals include Beirut, Cairo, and Taiwan.

Vegan options are available to order and pre-order onboard, as well as in Emirates Lounges. Customers can request vegan meals on all Emirates flights and across all classes of travel up to 24 hours before departure. However, on high-demand routes, plant-based meals are also provided as part of the main menu options.

Already consistently rated as the best airline for vegan travellers by many dedicated website polls including VegNews, Emirates invested into developing a new First and Business Class vegan menu in 2022 to rival acclaimed restaurants. It spent a year in development in Emirates Flight Catering, an expansive facility based at Dubai International airport, which is home to 11,000 employees and serves up to 225,000 meals daily, the largest flight catering facility in the world with international chefs of 69 different nationalities. A panel of highly skilled and experienced Emirates Flight Catering chefs worked closely with nutritionists to identify ingredients from existing popular dishes, which can be adapted to a vegan offering without compromising on flavour. They also focused on fusing flavours and ingredients from around the world to create a menu that will appeal to all passengers across the network, not just vegan customers. The menu was the focus of multiple presentations and tastings, featuring contributions from diverse cuisine specialists like Chinese, Indian and Arabic speciality chefs, to create a wide range of flavours and textures. The tasting panels included both vegan and non-vegan chefs and team-members to ensure an inclusive approach.

The importance of high-quality healthy ingredients

The benefits of plant-powered choices are of increasing interest to health-conscious customers who may not define themselves as vegan but will occasionally choose lighter choices to complement their lifestyle. Alternative products used onboard Emirates include items like artisan vegan cheese, chickpea flour instead of white flour, because chickpea flour is gluten-free and naturally aerates dishes like crepes and omelettes to an irresistible fluffy texture. Coconut or vegetable-based cream is used instead of full fat dairy cream, coconut butter or margarine instead of dairy butter, and coconut and flaxseed oil are used as healthier alternatives to vegetable oil, with the bonus of infusing additional flavour to dishes and a high smoke point. The dishes also incorporate a range of superfoods including rich-in-antioxidant black and white quinoa seeds, which help with cholesterol and blood sugar levels, lowering the risk of diabetes and heart disease. The new vegan menu in First and Business Class features unique koftas, made with plant-based products from the world-renowned Beyond meat company. Vegan desserts have been created using organic dark chocolate with 60% raw cocoa ingredients, sourced from the Dominican Republic. 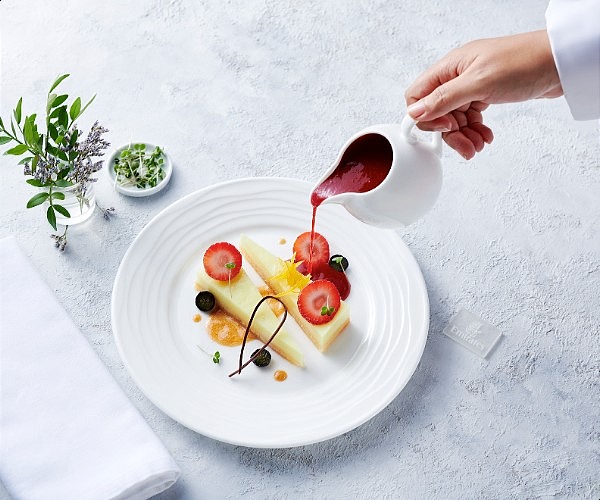 Vegan options onboard Emirates are rich in greens, fruits, and vegetables, sourced from several UAE-based suppliers including fresh locally-grown kale and lettuce from Bustanica. Bustanica is the world’s largest hydroponic vertical farm, a US$40 million joint venture investment through Emirates Flight Catering. The Bustanica produce is grown without pesticides, herbicides, or chemicals and First and Business Class passengers can enjoy farm fresh leafy greens in some dishes, including lettuces, arugula, mixed salad greens, and spinach.

Maximising the flavours of vegan cuisine

The Emirates team of award-winning chefs ensure vegetable flavours are maximised in dishes through clever use of textures and infusions to conjure the essential umami effect. Jackfruit, a fibrous tree fruit from southwest India, is used as a focal point in some of the vegan dishes as it cooks out with a meaty texture. Kohlrabi, a Northern European cross between cabbage and a turnip, has a mild taste that absorbs the flavours its marinated in or cooked with – a very effective addition to vegan cuisine. Other core ingredients providing a moreish meal include the inimitable tofu, cauliflower steak and varieties of nuts and legumes. With an emphasis on freshness, vibrancy of taste and satiety, Emirates’ vegan dishes showcase a tempting collection of colourful and healthy choices including heirloom cherry tomato tofu with edamame and roasted sesame, thyme scented mushroom ragout, fresh Hass avocado and mango salad timbale, or kale and cranberry salad served on a bed of grilled sweet potato. Ensuring that the tasty and healthy dishes are also edible to the eye, vegan meals are delicately garnished with farm-fresh herbs, berries, and colourful jus,’ while several of the new vegan desserts are adorned with thin sheets of genuine gold leaf.