Do you remember when you were five, and your mum would ask you if you wanted anything from the supermarket, and you’d probably reply with whatever branded cereal you’d last seen an advert for in-between episodes of Scooby-Doo? Then, two hours later, she’d return with whatever off-brand cereal approximation she could find, because it was better value, so you’d end up eating “Coco Porps”, “Corn Fakes” and “Weetabisn’t” for breakfast. Remember the disappointment, and the discovery that off-brand stuff is almost as good, but not quite? That’s the best way to describe Ubisoft’s newest game, Immortals Fenyx Rising: it’s trying to be a lot of things, and it’s got the right ideas, but it’s just not quite as good as any of them.

Comparing a game to another game can feel lazy, but Immortals Fenyx Rising – which used to go by the far superior title of Gods and Monsters – isn’t shy about hiding its influences. The game is the off-brand cereal version of Zelda: Breath of the Wild, mixed with a large helping of Assassin’s Creed and a generous dash of God of War. 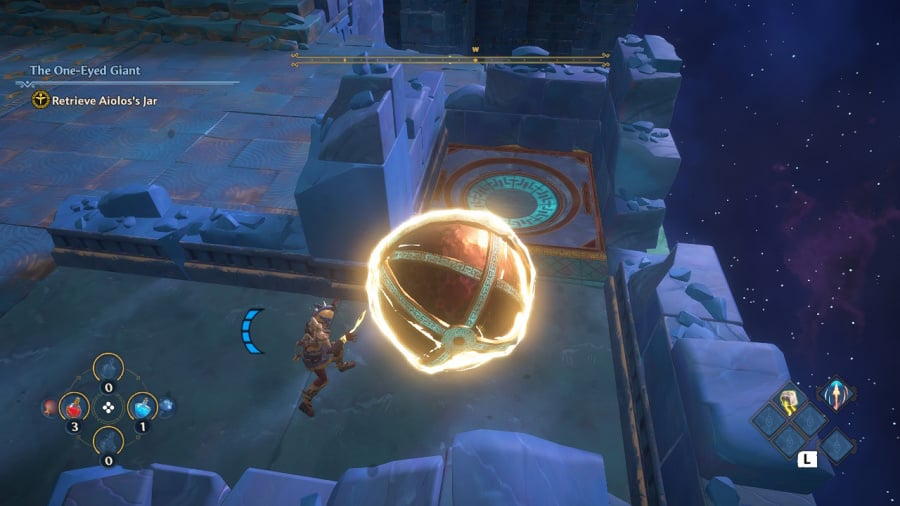 Made as a spinoff of Assassin’s Creed Odyssey, Immortals Fenyx Rising deals with the gods and monsters of Ancient Greek myth, albeit in a much more lighthearted way than its Ubisoft stablemate Odyssey did. The titular Fenyx is a myth superfan, and it’s up to her (or him, depending on your avatar choice) to defeat the evil monster-god Typhon, who has imprisoned some of the Olympians in an attempt to seize power. Fenyx is tasked with freeing the gods one by one, enlisting their help in the form of Blessings that slightly improve some aspect of her combat abilities.

Armed with a sword, an axe, a bow, and various special attacks that unlock as you play, Fenyx fights all manner of beasts cribbed from myth: minotaurs, chimeras, hecatoncheires, and gorgons can be found alongside regular swordsmen and animals. The combat is fun, drawing inspiration from Souls-like dodge-parry-hit combos, but comes into its own after a few skill tree upgrades.

Like Breath of the Wild, the open world is available to you from the beginning, and you’re free to explore it as you please. Cliff-climbing and gliding are the main methods of traversal, both of which use up Fenyx’s stamina metre, and there are even wild horses that you can tame to help you get to places faster. Like Assassin’s Creed, Fenyx must climb to the highest spot in each region to reveal the land, and she can then use Far Sight to scout out chests, puzzles, collectables and other goodies nearby. Far Sight does tend to take the mystery and wonder out of exploration, reducing the world to a bunch of Assassin’s Creed-like map markers, so it’s a shame that Immortals Fenyx Rising didn’t borrow more heavily from Breath of the Wild here. 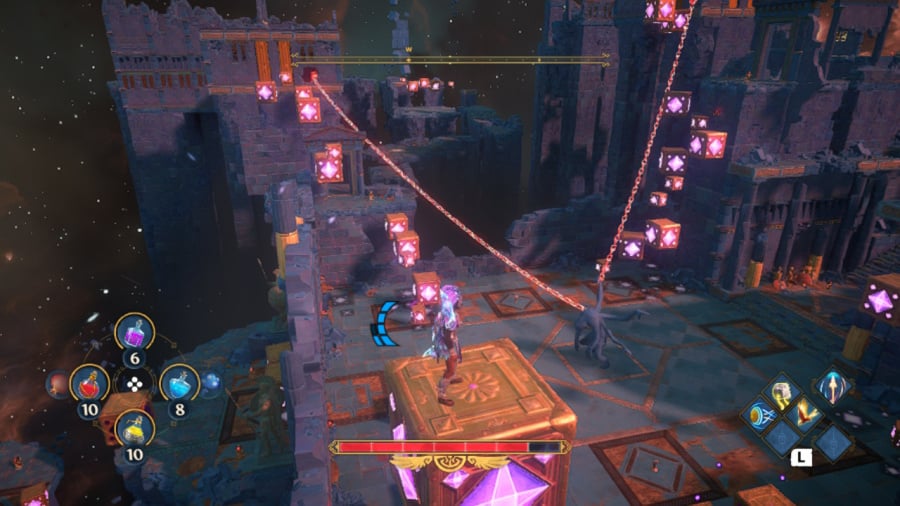 The most egregious borrowing of mechanics is, perhaps, the puzzles – both in the overworld and in underground action-platforming levels called “Vaults of Tartarus” – that have a lot in common with Breath of the Wild’s famous shrines. They even look a lot like the shrines, with the same blue-and-bronze ancient technology aesthetic. The puzzles mostly take the form of “push-block-on-switch”, “roll-ball-into-hole”, and “shoot thing with bow and arrow”, and Fenyx interacts with most objects by utilising a power that’s basically Breath of the Wild’s Magnesis.

There are also puzzles that don’t affect the main plotline but net you a bunch of rewards to upgrade your character and loadout. Odysseus Challenges are about bow-and-arrow skills; Lyre Challenges require you to memorise a tune, run hundreds of metres, and then recreate it on a big lyre; Constellation Challenges mean finding a bunch of glowy balls and slotting them into a grid in the correct configuration; and Fresco Challenges are sliding-block puzzles that can, quite frankly, go to hell. Some of these challenges are fun. Some of them feel a lot like busywork. A lot of the puzzles end up being frustratingly tricky, either because of the fiddly physics engine or because vital elements – like buttons, blocks, and levers – are exactly the same shade of bronze as everything else. 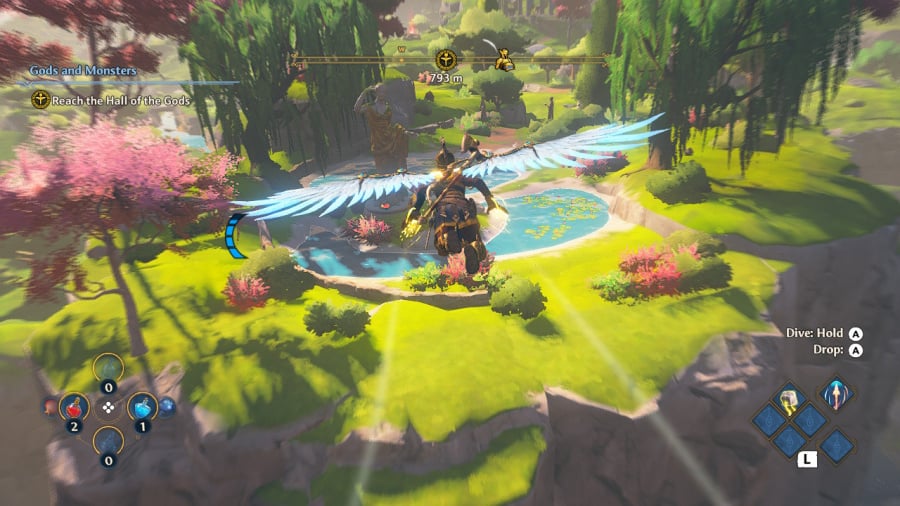 Immortals Fenyx Rising’s world is pretty from a distance, but quite boring up close, and not very pretty on the Switch in particular. The main four areas are colourful, but they’re all either green or a dusty brownish-orange that just turns into visual sludge. Because each area is modelled on a different god – Athena, Aphrodite, Ares and Hephaistos – there are some concessions to the aesthetic of each one, like Heph getting a bunch of broken automatons and huge forge fires, and Athena’s land being full of temples and libraries, but largely these areas are all a bit samey.

The story is where Immortals Fenyx Rising finally steps out of Zelda’s shadow. The game’s events are narrated by Prometheus – he of the “perpetually-having-his-liver-eaten-by-a-bird torture” fame – to Zeus, king of the gods. This narration varies from gratingly goofy to genuinely funny, with moments like a notable credits fake-out and multiple tongue-in-cheek references to modern technology and other games. Most of Immortals Fenyx Rising is trying so hard to be something else, but the story is its own beast, unshackled to what came before. It’s by no means a perfect story – there’s a lot of guff about Fenyx’s brother, who no one cares about – but it’s full of warmth, character, and plenty of mythological research. It’s almost as if the writing was the one thing that didn’t get workshopped to death. 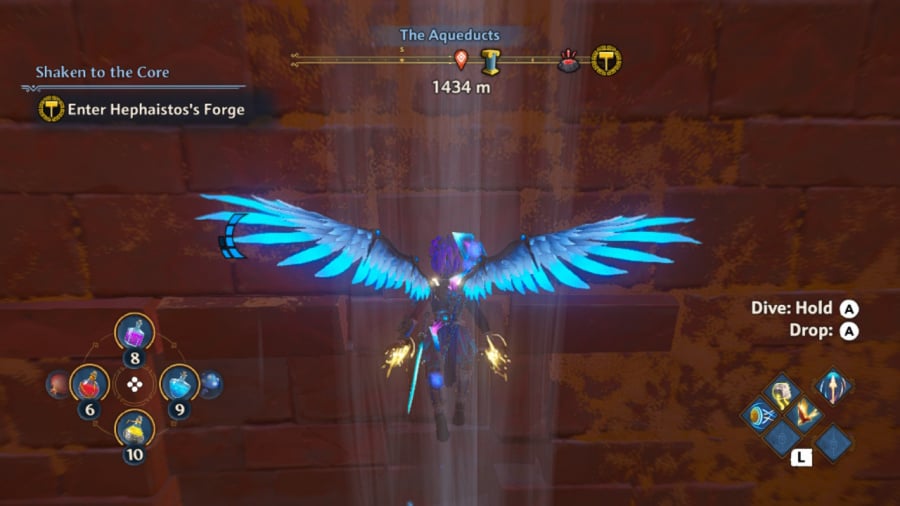 If only Immortals Fenyx Rising had the courage to be its own game, instead of copying Nintendo’s homework. Of course Immortals Fenyx Rising could never be as good as something with the resources of a Zelda game, but the constant comparison does it no favours. When it goes its own way, there are genuine moments of surprise and delight; interacting with cheeky, vain Hermes, witnessing the bickering between Aphrodite and her “ugly” husband Hephaistos, and pulling off the perfect dodge or parry are all great moments. But when Immortals Fenyx Rising gets irritating, or its puzzles don’t quite work, you’re just reminded that you’re playing an imitation of Breath of the Wild, and not the real thing.

Immortals Fenyx Rising tries to capture lightning in a bottle with its Breath of the Wild-inspired gameplay, but ends up being more of a lightning thief; it’s not as nice to look at and the puzzles aren’t as satisfying. Still, the combat is fun, the storytelling is excellent and, despite not being anywhere near as polished as Nintendo’s 2017 effort, it certainly does a passable impression. If you crave more Zelda and don’t mind the off-brand version, go for it, but if for some reason you still haven’t played Breath of the Wild, then that’s the game to go for.

Netflix’s The Last Kids On Earth Is...

Get A Peek At A New Harvest...