Researchers at the University of Texas, USA, have confirmed the specific mutation in the B.1.1.7 variant of severe acute respiratory syndrome coronavirus 2 (SARS-CoV-2), the causative agent of coronavirus disease 2019 (COVID-19), has allowed for it to be more transmissible than the ancestral strain. The N501Y substitution is one of 8 spike protein substitutions present in the UK variant and has also appeared convergently in the Brazil (P.1) and South Africa (B.1.351) variants.

The Menachery Lab, in collaboration with the Shi lab, used a combination of reverse genetics, and experimentation in hamsters and human airway epithelial cells to investigate the impact of the spike mutations present in B.1.1.7. They were able to rule out seven of the substitution mutants as serious bolsters of viral fitness, highlighting the N501Y mutation as the only “mutation of major concern.”

This research confirms what other studies have found, that the N501Y mutation is what permits the variant to be more transmissible, by allowing the virus to more readily bind to human angiotensin-converting enzyme 2 (ACE2) receptors. ACE2 is an enzyme present on the membranes of the human heart, kidney and lung cells, and if compromised, can increase a virus’ host range, transmission, and pathogenesis.

A pre-print version of the research paper is available to read in full on the bioRxiv*server.

Scott Weaver and colleagues infected Syrian hamsters with engineered SARS-CoV-2 mutants. The mutant variants were comprised of multiple strains, each of which had just one of the individual spike substitutions present in the B.1.1.7 variant, as well as a variant containing all eight mutations.

Hamsters were sampled after a period of 4 days post-infection, nasal washed and necropsied. The animals were co-habited with uninfected hamsters one day after initial infection for 8 hours.

Over the course of the analysis, the researchers were able to whittle down and isolate N501Y as the only consistent and significant major substitution to affect viral fitness, replicating itself faster in the nasal airways and lung cavities of the hamsters. They found that this mutation did not affect virulence, only the rate of transmission.

Finally, the researchers conducted binding assays using recombinant spike receptor-binding domain (RBD) and human ACE2 proteins, suspecting the change of asparagine to tyrosine in the N501Y mutation was what allowed for greater ACE2 receptor binding affinity. Their results suggest that the N501Y mutation allows for improves viral fitness for viral replication in the upper airway. 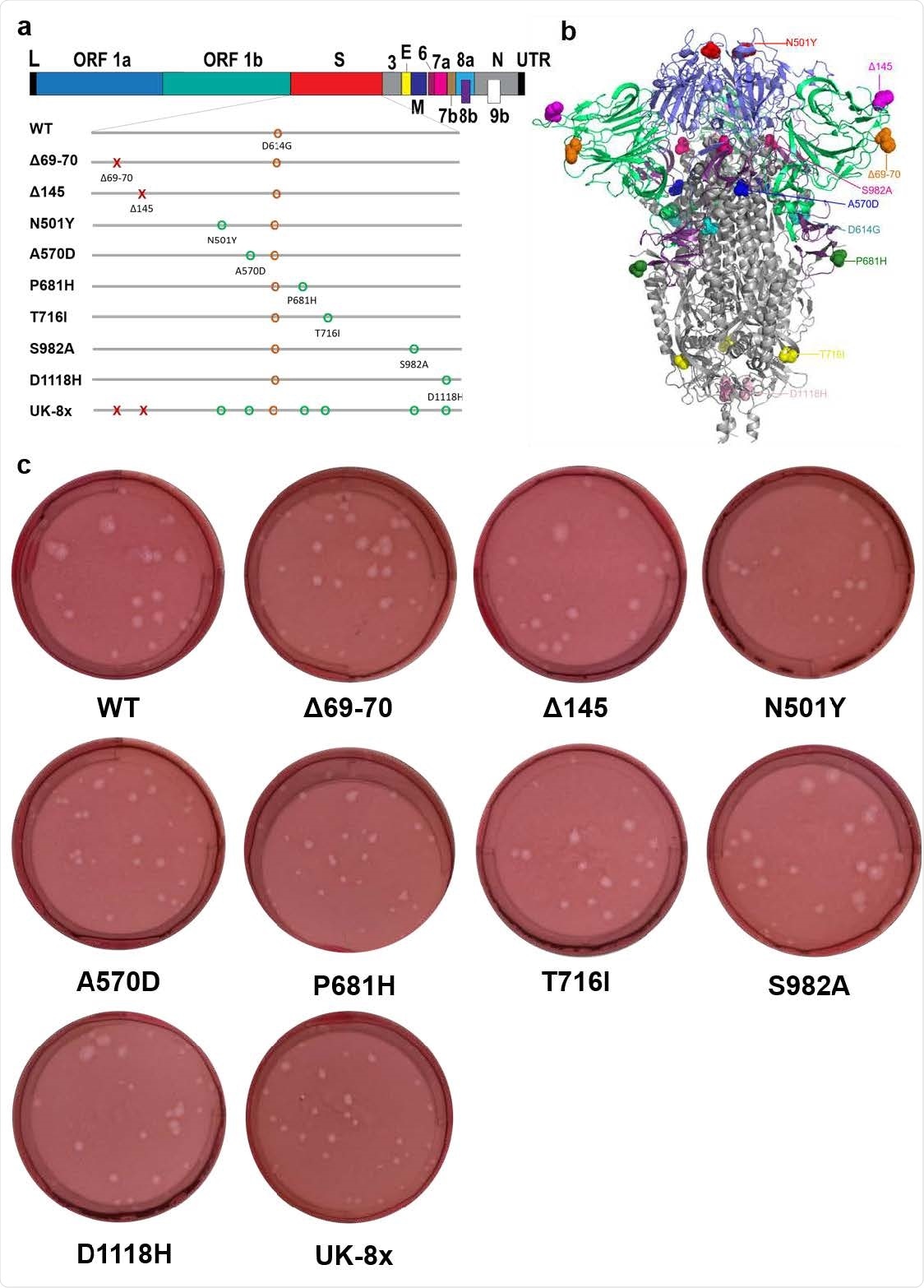 The construction of mutants and their plaque morphologies. a, The reverse genetic construction design of all the individual and combined mutations on the wt D614G backbone. Numbers on the upper genome map refer to open reading frames (ORFs). E, envelope glycoprotein gene; L, leader sequence; M, membrane glycoprotein gene; N, nucleocapsid gene; UTR, untranslated region. b, The location of all 8 UK B.1.1.7 substitutions and D614G on the SARS-CoV-2 spike protein trimer. c, The morphologies of all the rescued mutant SARS-CoV-2 variants. The plaques were stained 2.5 days post-infection of Vero E6 cells.

At present, the UK variant strain is still susceptible to neutralization by current vaccines. However, its increased transmissibility may allow for resistant mutants to arise quicker. The authors note that just two of the eight spike mutations conferred fitness advantages for the virus in infection and transmissibility – the N501Y substitution, and deletion of the Δ69-70 codons (also convergent in the Brazil and South Africa variants, although was variably effective). They caution, therefore, that the remaining six should be investigated to understand their roles in the B.1.1.7 variant. They also acknowledge that ideally, primate or human models would generate more relevant results than hamsters used in the study, however, these were the best rodent models available.

The total number of global cases of reposted SARS-CoV-2 infections is currently over 118.4 million. The B.1.1.7 variant has so far been reported in at least 25 countries, and case numbers are increasing.

By increasing our understanding of the virus and its variants, and the roles their mutations play, researchers can better combat its spread and virulence.

Transfer Emblem In Dragon Ball Z: Kakarot DLC Trailer Was once A Mistake, In accordance To Bandai Namco

Measuring a tau fragment in plasma can...