What’s a protecting neutralizing antibody titer towards SARS-CoV-2 an infection?

Caused by the worldwide spread of severe acute respiratory syndrome coronavirus 2 (SARS-CoV-2), the coronavirus disease 2019 (COVID-19) pandemic continues to damage global public health and economic vitality. The only hope of returning to any semblance of normalcy lies with the achievement of population immunity, either by natural infection or by vaccination.

A new preprint, released on the medRxiv* server, describes a predictive model of protective immunity against SARS-CoV-2 infection that could help evolve optimal vaccination strategies to maintain protection and reduce the death rate.

As natural infection is associated with a frighteningly high loss of life (over 2.6 million deaths and counting), vaccine-elicited immunity is the only viable way out. Active immunity has been observed to set in following the vast majority of infections.

Researchers estimate that convalescents with antibodies against the virus (seropositive convalescents) are protected against reinfection by 90%, while vaccine antibodies do the job of reducing reinfection by 50-85%. The duration for which protective immunity lasts is unknown, but the immune response is known to wane rapidly.

Also, new variants have rapidly emerged that could be resistant to antibodies specific to the antigens of the older strains.

The current study aims to identify the factors that predict adequate protection against SARS-CoV-2 infection so that it becomes possible to predict how the changes in immunity levels will affect the clinical outcomes of the individual patient. This would help to tailor vaccination and immunotherapy protocols so as to ensure this level of immunity is created and maintained – and, in turn, this would help economic activity to begin again with confidence.

In early influenza pandemics, a hemagglutination inhibition (HAI) titer of 1:40 is correlated with 50% protection from infection. This level results from analyzing data on standardized HAI tests carried out on serum from individuals challenged with the influenza virus vs controls.

The lack of similar assays for immunity to SARS-CoV-2 has made it difficult to compare the level of immunity in a susceptible population to that in a resistant one, and human challenge models are impossible with the current death rate.

The current study used neutralization titers obtained during in vitro studies with sera from vaccinated and convalescent individuals. The neutralization capacity of standardized convalescent serum has been suggested to be more comparable to the results from a variety of assays, and so the sera were normalized against this standard.

Neutralization titers were averaged, and the log standard deviation was also determined in each study for the sake of achieving comparable values. The normalized mean convalescent neutralizing titer was calculated for the same assay in the same study, and values from different studies were compared against the reported phase 3 vaccine efficacy.

That is, the level of neutralizing antibodies required to protect against 50% of infection is one-fifth of the mean neutralizing antibody titer found in convalescent serum. Again, when adjusted to prevent false results due to a normal distribution of data, they found that the estimated protective level was about 29% of the mean convalescent level, slightly higher than the earlier estimation. However, the latter figure represents the titer needed to ensure 100% protection.

This demonstrates the ability to predict the correlation between the average level of protection and the observed efficacy of protection if the level of neutralization titers and their distribution is known.

To test the utility of this approach in arriving at the protective efficacy of a new vaccine, the researchers analyzed the data against all possible groups of vaccinated or convalescent subjects, apart from one, to predict the efficacy of the last group.

They tested the predictive accuracy against a new vaccine with phase 3 efficacy results recently released, at around 81%. The researchers found that, with the mean observed neutralization level of around 79% of the convalescent titer measured in that study, the new vaccine had a predicted efficacy of around 79%, which is close to the reported figure.

This study can be carried forward with access to more standardized assay and trial results, which would yield more homogeneous data. The researchers caution that the association of neutralization with protective efficacy in these studies does not imply that such antibodies mediate protection against infection.

Instead, other immune responses leading to protection could be correlated with neutralizing titer, and thus create an apparent association. Thus, examining the predictive value of other serological and cellular immune markers is necessary to identify the best predictive marker, compared to neutralization.

The researchers compared the neutralization titer decay in convalescent sera and in vaccine recipient sera. They found that when measured at 26-115 days from vaccination or from the onset of symptoms, the titers appeared to decline at almost the same rate.

The researchers assumed that neutralization is the major mechanism of protection against infection or at least the major correlate; that both vaccine-induced and natural antibodies decay at the same rate; and that the rate of decay is unrelated to the initial titer. The researchers then constructed a model of neutralization and protection over the first 250 days after vaccination, using the half-life of the 90-day neutralization titer from convalescent sera.

This showed that decreasing neutralization titers affect protection from infection in a non-linear fashion, with the drop being proportional to the initial vaccine efficacy.

This approach would also allow an estimation of the time taken for the initial efficacy to drop to 50% or 70%, thus helping to determine the interval necessary before a boost will be needed to maintain minimal neutralization efficacy levels.

The model also shows that a lower neutralization titer against a variant of concern (VOC) will have a greater impact on vaccines with lower protective titers against the wildtype virus. If the vaccine has high efficacy (95%) against the latter, for instance, a five-fold drop in efficacy would reduce the efficacy against the VOC to 67%.

Conversely, if the vaccine has only 70% efficacy at first, the efficacy against the VOC at five-fold lower levels will be only 25%. Such figures are of concern in the light of recent research, which shows that the neutralization titer against the South African VOC B.1.351 is 7.6-9-fold lower than for the earlier variants. 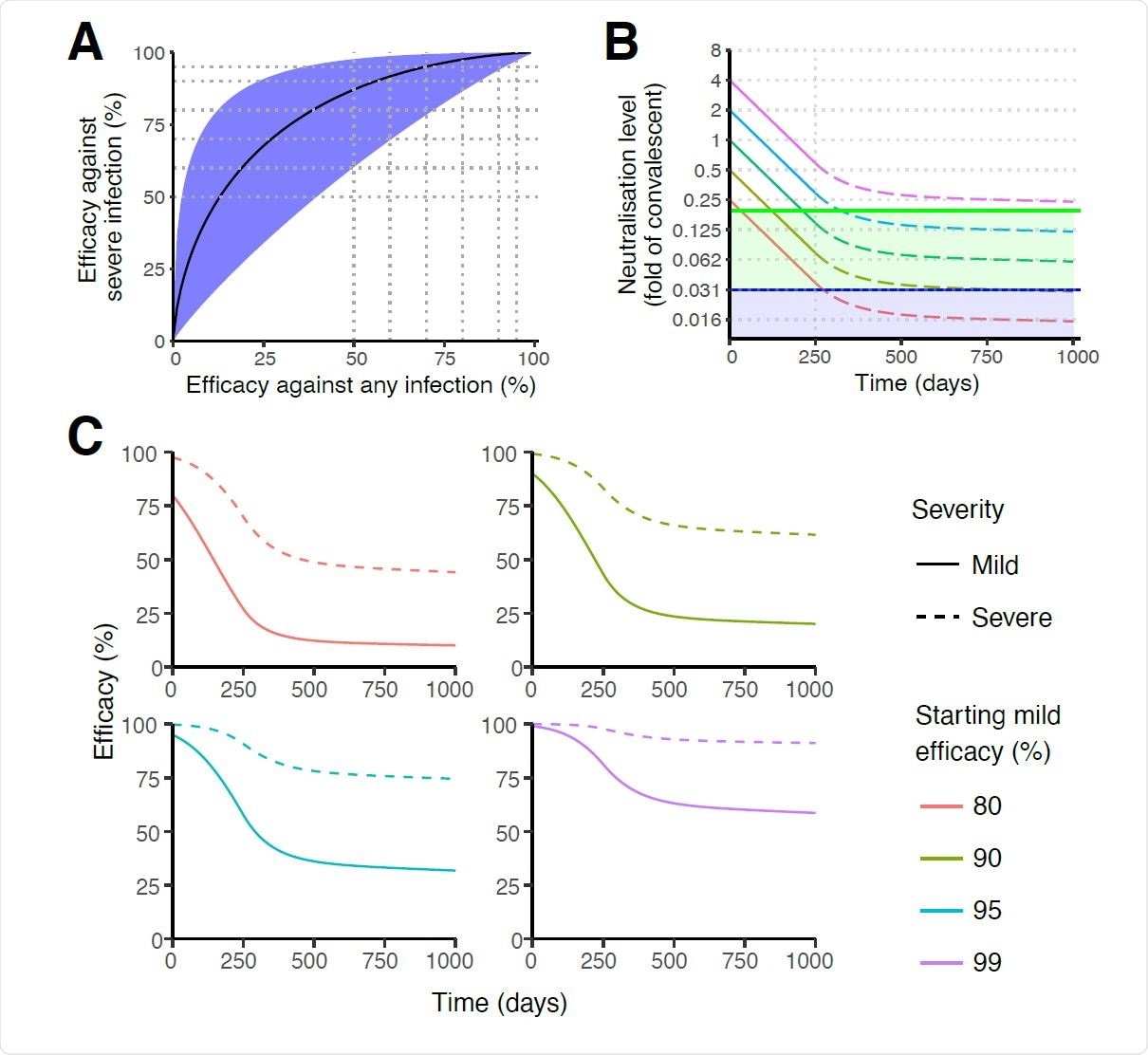 Protection from severe infection. (A) The predicted relationship between efficacy against mild (any) SARS-CoV-2 infection (x-axis) versus efficacy against severe infection (y-axis). The black line indicates the best fit model for the relationship between protection against any versus severe SARS-CoV-2 infection. Shaded areas indicate 95% confidence intervals. Efficacy against severe infection was calculated by using a severe threshold that was a factor of 0.16 smaller than mild infection (CI = 0.039 to 0.66). (B) Extrapolating the decay of neutralisation titres over time. This model assumes a half-life of SARS-CoV-2 neutralisation titre of 90 days over the first 250 days 5, after which the decay decreases (at rate 0.01d-1) until a 10-year half-life is achieved 33,34. For different initial starting levels the model projects the decay in level over the subsequent 1000 days. The green line indicates the predicted 50% protective titre from mild SARS-CoV-2 infection, and the purple line indicates the 50% protective titre from severe SARS-CoV-2 infection. The model illustrates that, depending on the initial neutralisation level, individuals may maintain protection from severe infection whilst becoming susceptible to mild infection (ie: with neutralisation levels remaining in the green shaded region). (C) Extrapolating the trajectory of protection for groups with different starting levels of protection. The model uses the same assumptions on the rate of immune decay discussed in panel B. Note: The projections beyond 250 days rely on an assumption of how the decay in SARS-CoV-2 neutralisation titre will slow over time. In addition, the modelling only projects how decay in neutralisation is predicted to affect protection. Other mechanisms of immune protection may play important roles in providing long-term protection that are not captured in this simulation.

The study also shows that the 50% neutralization level that confers protection against severe infection was 3% of the average convalescent level, assuming that neutralization and not cellular responses are important in this protection.

This six-fold difference in the protective titer against severe infection relative to that against any infection will probably be reflected at all levels of vaccine efficacy against mild infection with SARS-CoV-2. If so, and if it does not change over time, individuals with protective immunity are far more likely to remain protected against severe disease for far longer, even with waning neutralization titers, than to be protected against infection per se.

The researchers project an exponential decay rate after eight months until a ten-year half-life. Against this background, they predict that even without a boost to the immune system, a large percentage of individuals will remain protected against severe infection with a similar strain, requiring only 3% of the initial mean neutralization titer in convalescent patients, even if mild or asymptomatic infection occurs as the titer drops below 20% of the mean convalescent titer.

This study provides a model to use the available limited data on convalescent and vaccination antibody studies in order to predict the course of immunity to the virus.

Lockdowns Harder on Girls, and House responsibilities Is Giant Reason why Why