Harvest Moon: One World, to summarise the next few hundred words of complaining, is a badly-paced, unattractive, hollow facsimile of a Harvest Moon game. And yes, we’re well aware of the Natsume/XSEED schism, and that Story of Seasons is the “true” Harvest Moon game, but even still, how the mighty have fallen. Surely it can’t be that hard to make a good farming game? Or at least a decent one? One World falls so short of “decent” that it’s almost incredible how much they messed up a pretty simple formula.

Right, then. Let’s begin. Harvest Moon: One World starts abruptly, spending very little time on story before kicking you into its sparse, flat world. The Harvest Goddess is missing, and everyone in the world has forgotten what vegetables are. However, you are a special, magical being, and by virtue of being so special and magical, you discover turnips (arguably far worse than potatoes) and begin your journey to restoring the world’s agriculture, and, eventually, the Harvest Goddess. 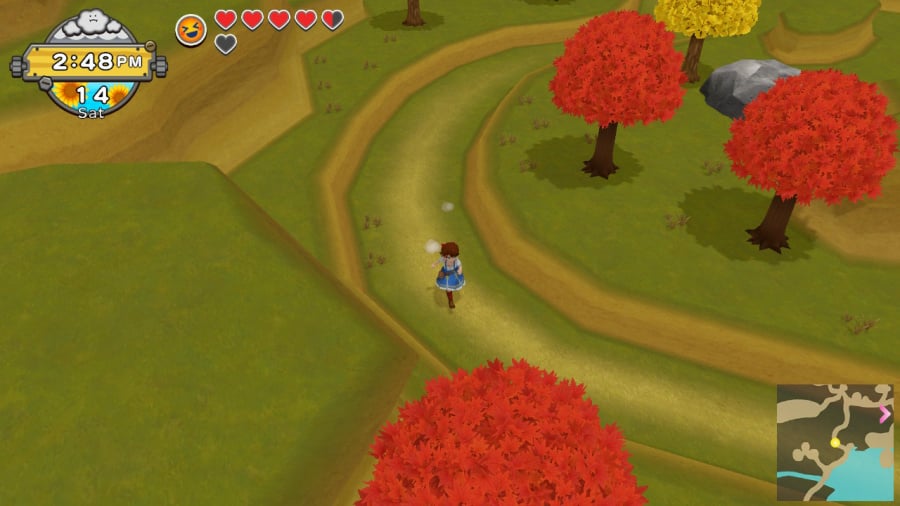 There are six areas in the game, each one themed around a season, climate, and vague flavour of a particular country (like Finland, Germany, Hawaii, and Egypt), and you’ll have to complete the story in each one to free the Harvest Spirit that represents their people, and move one step closer to finding the Harvest Goddess.

The game revolves around fetch quests. Villagers will send you letters, saying “get me 6 chickpeas” or “bring me 18 daisies”, and it’s up to you to grow and/or find what they need in order to advance the plot. These fetch quests will require that you find seeds, which is the game’s main gimmick: you can no longer buy seeds in shops; instead, you have to find Harvest Spirits around the world, who will give you a single bag of seeds.

Back in games like Harvest Moon DS, finding the Harvest Sprites was a matter of performing tasks and interacting with the world, unlocking each one by making progress in your tasks. In One World, they are little blue glowy dots in the world that you press ‘A’ next to, and they respawn every single day in exactly the same place. 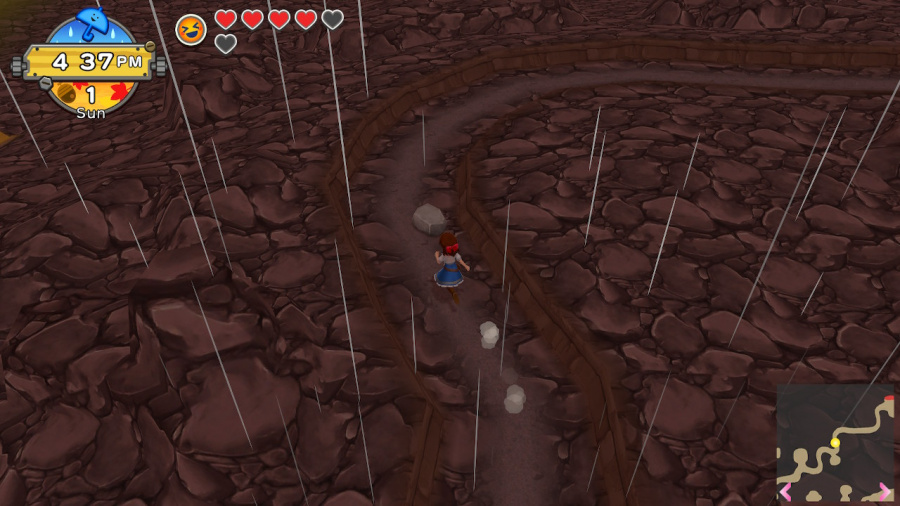 Each Sprite will give you a seed – the same seed each time – which can be planted only in certain locations, and certain seasons. You will not be able to buy these seeds at the shops until you’ve shipped lots of that one crop, so if you need multiples, it’s time to go back to that exact spot again for several days. Hope you love walking! The shops are pretty bloody useless for most of the game, selling practically nothing beyond animal feed and saplings, because apparently they also forgot how to have a functioning economy alongside forgetting how to farm.

Not that it matters too much anyway, because the currency is wonky as hell. It’s so hard to make decent money, because although selling crops will net you a little bit of profit, someone will undoubtedly need 8 of them for a quest, and you’ll have to spend a week gathering all the seeds again. The animal produce – eggs, milk, and wool – is easy enough to get, but is of one quality, no matter how much your animals like you, so there’s little reason to interact with the animals beyond squeezing them until dairy comes out. What’s more, some of the recipes cost up to 75,000 gold – that’s as much as it costs to upgrade your house. For a recipe. 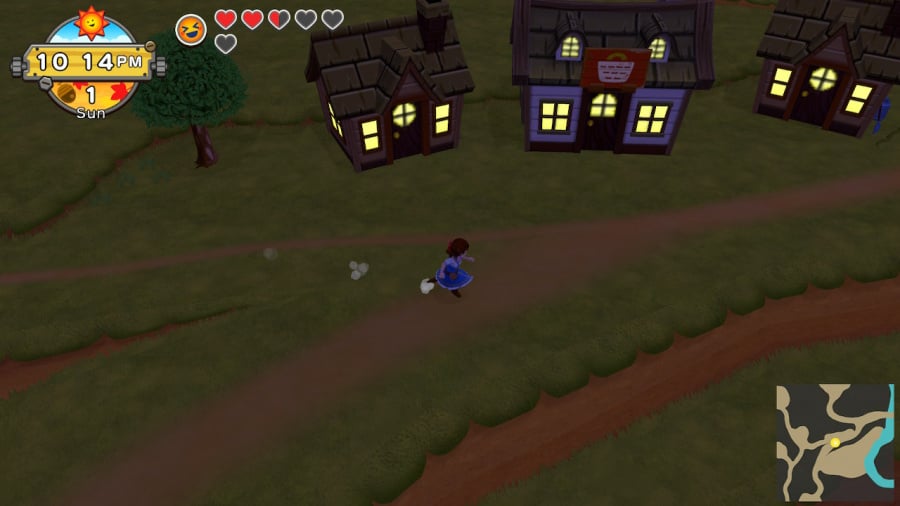 A horse costs at least 15,000 gold – a sum that’s hard to make in the first two seasons – and you’ll regret every second you don’t have it, because One World’s world is made up of loooong, winding corridors of nothingness leading to vast expanses of empty land, and – get this – walking takes stamina. Yeah. We passed out multiple times just from trying to get home at, like, 6pm.

The people that dwell in One World’s various lands come in a few different flavours: dateable characters, of which there are ten; people who are related to said dateable characters; and a bunch of unnamed randoms, who bear titles like “Awkward Man” and “Excited Woman”. These aren’t one-off characters: they are persistent, and even give you quests. Good luck trying to figure out which of these NPCs is the “Friendly Man” who asked you for three eggs!

Lordy, we’ve written so many words on the bad parts of Harvest Moon: One World and we haven’t even gotten to the farming bit properly. Surprise: it’s bad! But not bad in a truly awful way, just uninspired, dull, and insultingly simple. This is a farming game in which your “farm” is reduced to a bunch of pre-set squares in pre-determined places that you can bounce between with the use of the Expando-Farm, an initially promising new mechanic that turns out to be just as lifeless as the rest of the game. 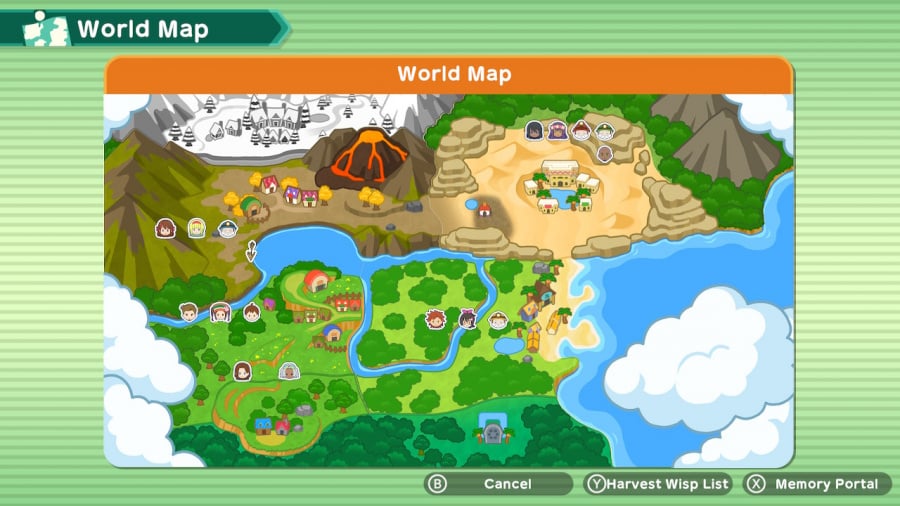 If you want to plant a range of vegetables, fruits, and flowers – which you’ll need to, if you want to progress at all – then you’ll have to spend hours of each in-game day either walking or fast-travelling to each individual farm, taking care of the crops, and going to the next place. Crops are split up into extremely specific types, so instead of “bell pepper”, you’ll have orange peppers, green peppers, and red peppers, despite those vegetables coming from the same plant in the real world. These mutations will happen whether you want them to or not – for example, planting potatoes in the mountains will always turn them into “Sigelinde”, so if you’re desperately trying to grow a bunch of potatoes for a request, you might have just wasted a bunch of seeds.

Some crops (and mutations, which is a core part of One World’s gimmick) only grow in specific areas, like the top of a volcano, or a tiny meadow, but the fast-travel points are never anywhere near those farms, so you’ll be doing a lot of walking even after you’ve unlocked the ability to teleport. Likewise, the mines – which are unnecessarily large areas with the occasional ore deposit, and no combat like in past games – are not close to fast-travel points, either.

We haven’t even begun to mention the things that have been removed from the game in its time under Natsume. The most egregious of these – for our money, anyway – being the ability to have same-sex marriages. Not only is this an insult to the many, many fans of the series and genre who are under the LGBTQ+ umbrella, but it’s a backwards, unnecessary denial of modern times. What’s more, the character creator is unbelievably limited, restricting players to only a handful of lighter skin tones, and hair colours that include “lavender”, “green”, and “yellow”, but not “red” or “grey”. The outfit selection is not much better, and you don’t even unlock them until very late in the game. 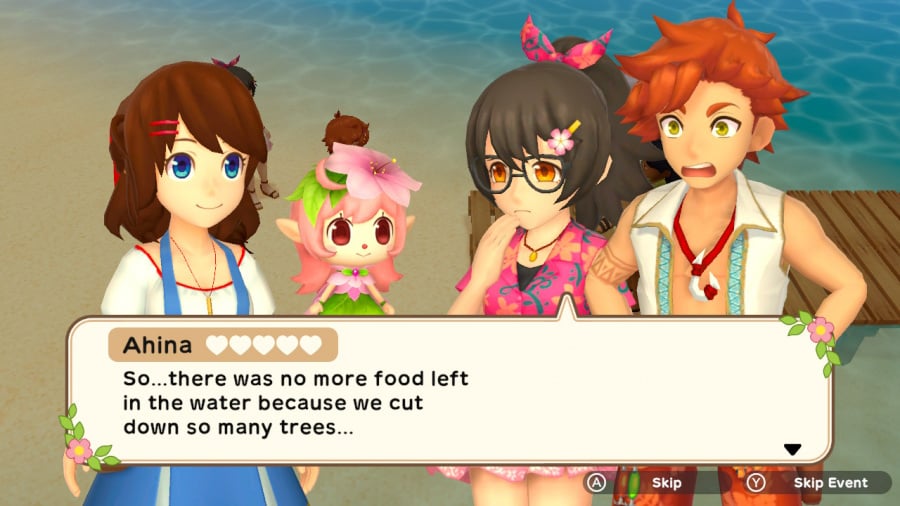 Add on other things like the inability to sell animals, the short romantic cutscenes, the lack of festivals (which are unlocked through befriending characters), the game progression that’s locked behind dialogue that you have no way of knowing about, and the stripped-down shops and cafés that litter the land, and you’re left feeling like this pared-down version of a farming game is little more than a minimum viable product.

Folks, we have no doubt that some of you will persevere, and find something to like about Harvest Moon: One World, and we’re genuinely happy for you if you do. Finding joy in anything is a feat worth celebrating. But we could not find enjoyment in this game. It looks like a mobile game, and it plays like a Harvest Moon game in the same way that Farmville plays like a Harvest Moon game. It’s soulless, vapid, and completely misunderstands what makes games like this charming. In a post-Stardew Valley era, there’s no excuse for consistently missing the mark like this.

We wanted to write this piece post-marriage, but hopefully, you’ll understand why we couldn’t, in the end. At first, we were making steady progress, with our chosen future spouse at four and a half hearts out of five – usually a good sign – and we’d almost solved all of the problems that form the main plot of the game. But then we started wondering how long it would actually take to get a ring on our finger. We won’t spoil it too much, but it turns out that you can’t get married without spending 400,000+ gold, plus a ton of time in the mines, plus finishing the main story, plus unlocking all the tool upgrades, plus relying on the game’s RNG and a long period of waiting for things to grow to get the rare materials that you need. 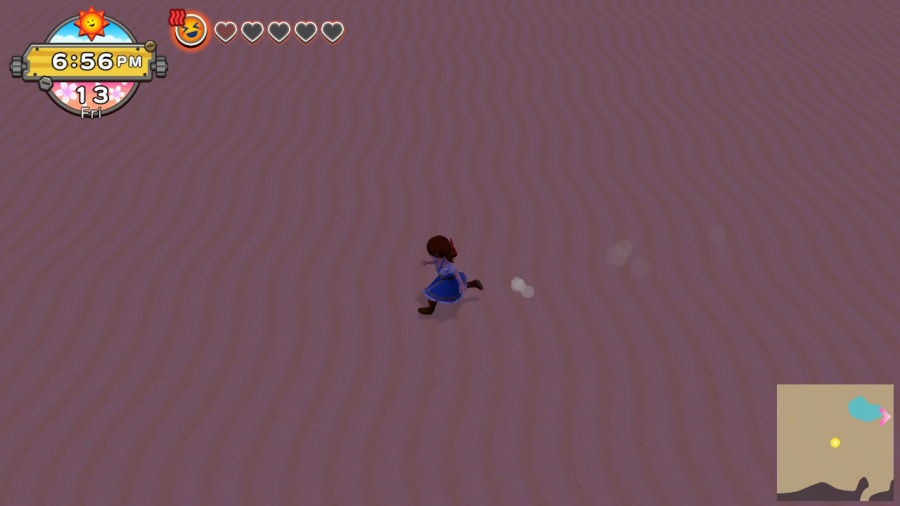 We just couldn’t do it. We don’t need to get married to know that this game is a dud. We had hopes. We really did. The Expando-Farm seemed cool, and there was evidence that the dialogue in One World might actually be better than Story of Seasons: Pioneers of Olive Town. But this game isn’t even bad enough to be funny – it’s just sad. It’s disappointing, shallow, and sad.