Endangered marine mammals — seals, dolphins, whales, and otters — are almost as vulnerable as humans in becoming infected from severe acute respiratory syndrome coronavirus 2 (SARS-CoV-2). Researchers from the Dalhousie University in Canada published a study in Science of The Total Environment that found human wastewater as a potential mode of coronavirus transmission to animals.

The team analyzed the genetic sequences of the ACE2 receptor from 36 marine mammal species, including whales, dolphins, seals, sea cows, sea otters, and polar bears, to identify which marine mammals were most at risk of becoming infected with SARS-CoV-2.

The team also compiled a list of endangered mammal species from the International Union for Conservation of Nature Red List of Threatened Species to understand which at-risk species were most in danger from the virus. The Killer whale, Pygmy sperm whale, and Sowerby’s beaked whale were excluded from the data analysis.

The mammal population data was superimposed with Alaska’s wastewater levels determined through the Alaska Department of Environmental and Conservation.

Compared to the human ACE2 receptor, almost all marine mammals had mutations in the ACE2 binding residues at D30 and M82. The exception was the Antarctic minke whale which only had an M82 mutation. However, the mutations did not alter the binding affinity of SARS-CoV-2 spike protein to the ACE2 receptor.

The California sea lion had 8 out of 25 mutations on the ACE2 receptor — the highest amount of mutations in all observed mammal species. The high number of mutations was associated with a substantial decrease in binding affinity between the spike protein and the ACE2 receptor. Sea cows held 7 mutations that appeared to interfere with virus binding.

Some mammal species — the Weddell seal and sea otter — had many mutations ranging from 6-8 but showed greater binding affinity and an increased risk of infection. In total, about 15 of the 36 examined species had ACE2 mutations that stabilized virus-receptor interaction.

The researchers suggest an evolutionary perspective to explain this finding. They infer the stabilization in binding could be because the virus is closely related to these particular species. As a result, these 15 mammals are at the highest risk of infection.

Seals, walruses, and otters have the highest risk of infection

About 18 of 21 Certacea species had a high or higher than human susceptibility towards SARS-CoV-2. Only the Sowerby’s beaked whale had a lower susceptibility to the virus, which may be due to unique ACE2 receptor mutations on S19P and Q24K.

Since many cetacean species are social, such as the Tursiops truncates (bottlenose dolphin) and Delphinapterus leucas (beluga whale), their high susceptibility suggests that their populations are especially vulnerable to intra-species transmission of a novel virus such as SARS-CoV-2,” wrote the researchers.

Seal species were also more likely to become infected with SARS-CoV-2. The only exception was the California sea lion, who had a novel N330D mutation in the ACE2 protein that lowers binding affinity.

Sea otters also had a high susceptibility to the virus.

Of all the marine mammals studied, the Atlantic Walrus had the highest binding affinity to SARS-CoV-2, and thus, the highest infection risk.

Over half of the mammal species studied with moderate to high susceptibility to SARS-CoV-2 were also considered Near-threatened, vulnerable, endangered, and critically endangered.

The researchers suggest wastewater carrying SARS-CoV-2 could infect the 15 species and put them at high risk for extinction.

Wastewater that ends up on the Alaskan western shore could potentially infect Ringed seals and Spotted seals that frequently roam around the area. 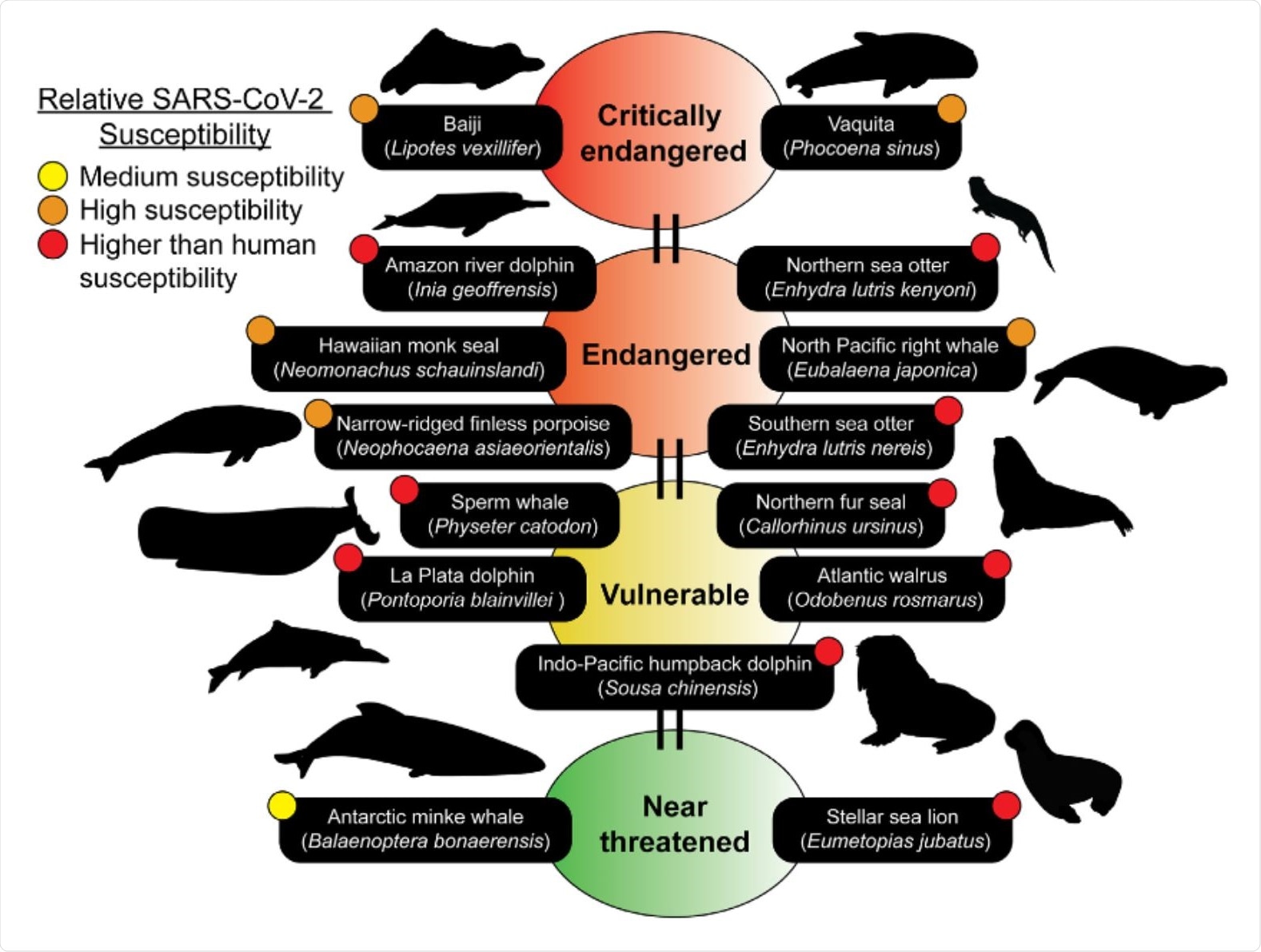 Marine mammal species predicted to be susceptible belong to the IUCN Red list. Many of the species predicted to be susceptible are members of the IUCN RedlistofThreatenedSpecies (https://www.iucnredlist.org). The IUCN Red list is an indicator of the world’s biodiversity and provides the most comprehensive data on the global conservation status of aspecies. 15 susceptible species ranging from medium to higher than human predicted susceptibilities can be identified on the IUCN Red list. Conservation statuses updated as of July25th, 2020 were used. Silhouettes of species were drawn or obtained from PhyloPic (http://phylopic.org).S. Mathavarajah, A.K. Stoddart, G.A. Gagnon et al.Science of the Total Environment 760 (2021) 1433465

In the Alaskan southern shore, the researchers found wastewater treatment did not properly eradicate SARS-CoV-2 before dumping. This places the Northern sea otter and beluga whale populations are at high risk of becoming infected.

Given the danger of coronavirus transmission and extinction in mammal species, the researchers advise biological conservation efforts on managing wastewater. Additionally, marine mammals confirmed to have COVID-19 should be quarantined or some type of restricted access from healthy mammals.

Another potential avenue is getting marine mammals vaccinated as well. “Since the vaccination technology is available, it is not far-fetched to imagine that wild populations affected by the virus, just like humans, can be protected by herd immunity through vaccination.”

10 Issues Each and every Educator Wishes To Know