Back in the early ’90s, Castlevania was mostly known for being a console series, with three entries on the NES, three on the Game Boy, and four total across the 16-bit platforms (assuming, of course, you consider the PC Engine to be a true 16-bit system). But early in the series’ life, Konami released an arcade game, known as Haunted Castle, which wasn’t a port of any other outing but rather an original title. It was a flop and didn’t see much distribution, being sort of a “lost” Castlevania until the advent of emulation in the late 1990s. But Konami has been keen to keep it in circulation recently, including it as both part of the Arcade Classics Anniversary Collection in 2019, and as a separate release in part of Hamster’s Arcade Archives series.

The story in most of the other Castlevania games typically revolved around Simon Belmont (and friends, if applicable) hunting down and beating up Count Dracula, because it was the good and proper thing for vampire killers to do. In Haunted Castle, Simon gets a bit of extra motivation with his wife being kidnapped by the nefarious vampire literally seconds after walking out of the wedding chapel. The goofy manner in which the classic Wedding March song turns sour as the clouds go ominous and Simon’s lady friend is swiped away, leaving him inhis iwhite tuxedo looking mildly irritated, helps set the off-kilter tone of this incredibly frustrating entry. 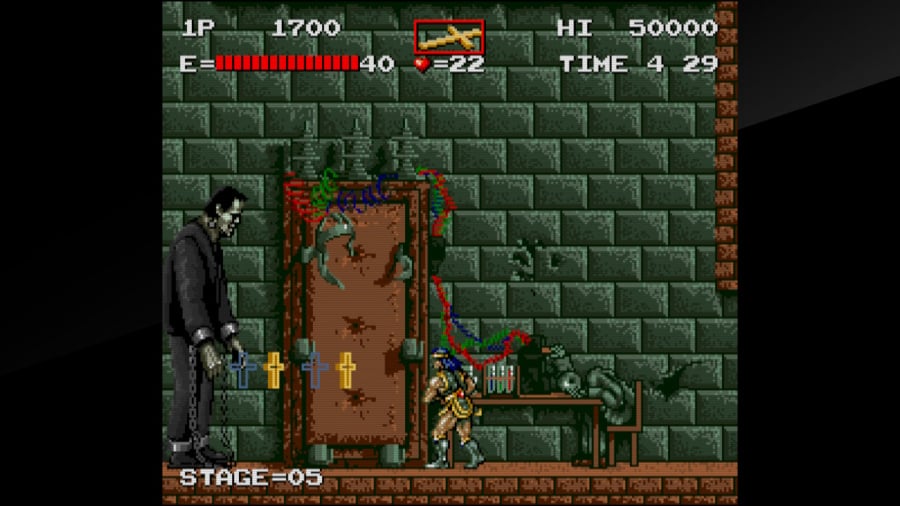 The basics of a Castlevania game are in place – you adventure through six stages across the land, eventually ending up in Dracula’s castle, whipping skeletons, zombies, bats, and other assorted creatures, most inspired by classic Hollywood horror films. But a lot of it just feels wrong. Take for example, Simon’s design. As a muscular, leather-clad barbarian-type, he actually looks reasonably close to how he’s presented on the cover of the original NES game (and the title screen of this one), but it looks awfully strange compared to any of his console counterparts, especially his awkward walking animation. Movement is slow and attacking feels flimsy. This has rippling effects through the rest of the adventure, particularly since Simon’s sprite is so large, making it exceedingly difficult to kill the tiny bat enemies that remain a constant nuisance throughout the whole game.

Unlike most of the other Castlevania games, there aren’t any candles to whip, so weapon upgrades, subweapons, and hearts are dropped by specific enemies. But main weapon upgrade drops are uncommon, and if you miss any of them, you’ll be stuck with the default whip for quite a while. Still, it’s not like any of the weapons are particularly strong, because most enemies take multiple hits to kill. Castlevania fans will probably be familiar with the jumping hunchback enemies, and they make an appearance here, but they also take at least two whacks to dispose of and it’s nearly impossible to clear them out without taking damage, especially since they often attack three at a time. You’ll find your energy draining very quickly in Haunted Castle. 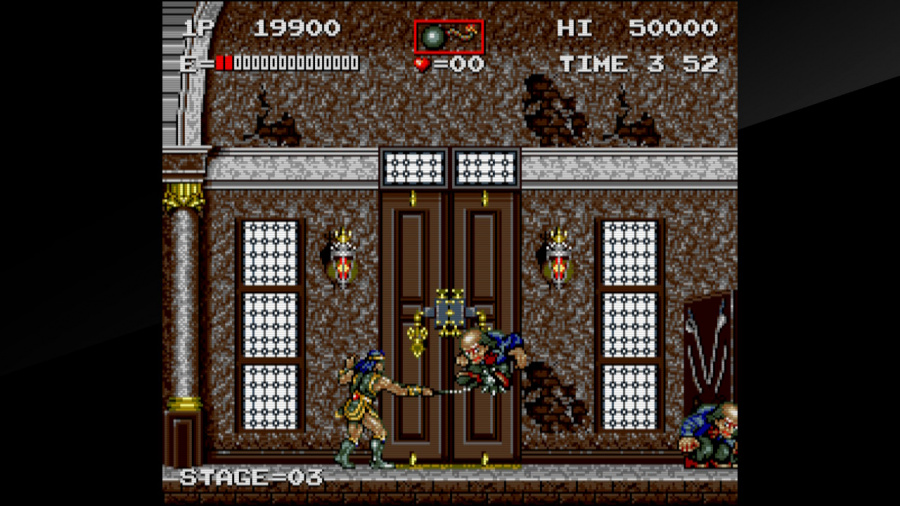 There’s sort of a cheat around this; while you only have a single life, you can insert multiple credits to extend your life bar a few times, plus there are checkpoints partway through each stage for when you perish. The original arcade game limited the number of times you could continue, though this version lets you continue as many times as you want. You shouldn’t feel bad for cheesing it, because there aren’t any actual health restoratives, and it’s really the only feasible way to see this one through to the end.

Ex-Konami staffer Masaaki Kukino has revealed recently that the title was completed in just six months and there wasn’t time to balance it properly, and it shows. Arcade games are often designed to suck in coins but Haunted Castle is especially egregious in the way it hurls hazard after hazard at the player, giving them very little chance to respond. Even if you memorise enemy and trap placement, the awkward controls often conspire to kill you. Simply put, it’s not much fun on a pure gameplay level.

And despite how frustratingly designed and poorly balanced it is, Haunted Castle is actually worth at least one playthrough for Castlevania fans. Visually, it’s inconsistent, as noted with the awkward Simon sprite and some other strange-looking enemies, but the background design is generally well done. It predates all of the 16-bit console entries, and has a very different look and feel. And some of the level designs are pretty cool, at least in concept. 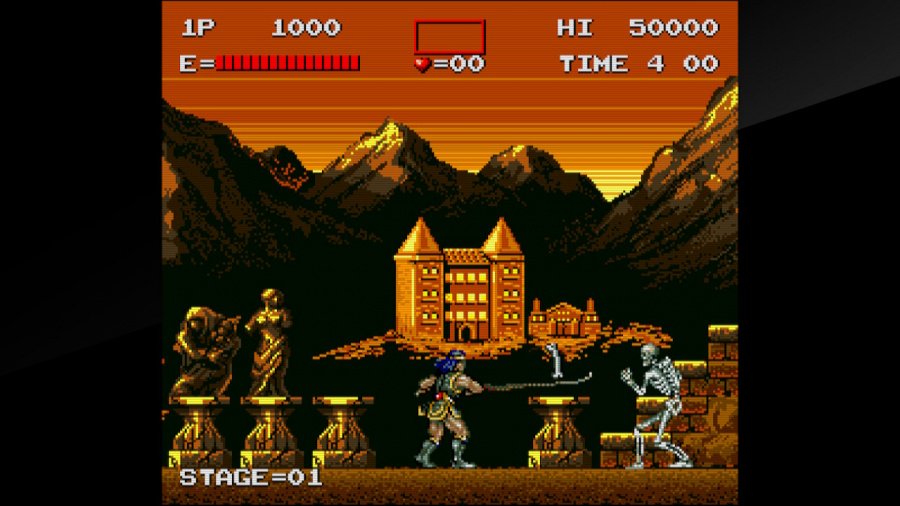 The first stage begins at dusk and quickly transitions to night. It begins to rain, as a wall comes to life and flings itself at you brick by brick. Then a torch is knocked over and sets the ground ablaze, forcing you to leap over its flames, before entering a mausoleum and fighting against Medusa. The second stage starts in a foggy forest before walking down to a subterranean canal, where the river water is presented with an odd colour cycling effect. After reaching the other side, you emerge to a mountainside under a blood red sky. The next stage, the typical castle entrance hallway area, has a bizarre section where you’re warped away to what appears to be Grecian ruins where you fight off harpies, only to be warped right back when they’ve been killed.

These are the highlights of the game, and the rest of the stages are a little blander. But it’s still cool to see since it has many classic Castlevania tropes but before they were fully formed – after all, this is technically the fourth release in the series, published in 1988 after the MSX2 game and the first two NES games. For example, while the whip has been tied to the series’ identity for a long time, in this game, Simon can actually wield a sword. It doesn’t function any differently, but it sure is a novelty.

There are subweapons like firebombs and a boomerang that doesn’t actually return when you throw it, but also a cross that fires out a series of extremely powerful beams. Some of the ideas that were used in later Castlevania games pop up here – like a gigantic rock monster, haunted dining tables, and a knight made out shattered stained glass window shards. The soundtrack, too, is fantastic. It was composed by Kenichi Matsubara, who also worked on Castlevania II: Simon’s Quest and other classic NES Konami games, and even includes the series’ trademark “Bloody Tears” tune. The synth quality is stellar for a late 1980s arcade game and nearly every track is fantastic, plus some of them have popped up in later games. 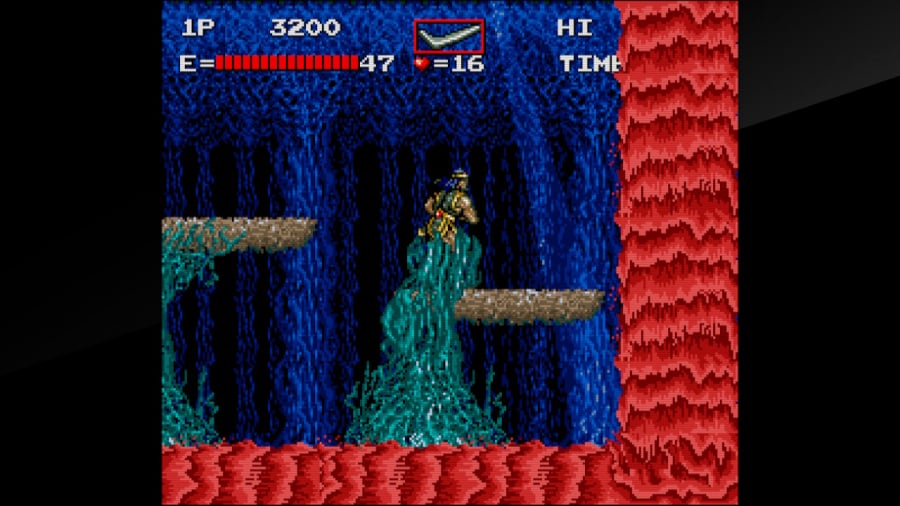 But what sets this standalone Arcade Archives release apart from the Arcade Classics Anniversary Collection? Well, not much. Both versions were ported by Hamster, so the emulation is basically identical. Both versions let you tweak the difficulty settings a bit, too. That release contained the American and Japanese versions – the American version is significantly harder, with enemies inflicting much more damage. The Arcade Archives release includes those two as well as the European version, which is almost the same as the Japanese version but with an English title screen. The Arcade Archives version also has more display modes, allowing you to customize the scanlines and such, and tweak things like enabling or disabling continues.

There is also the usual Hi Score and Caravan modes found in other Arcade Archives releases, allowing you to post your score online. Due to these options, it’s very slightly better than its Anniversary Collection counterpart… but that version includes previously unseen supplemental artwork, plus seven whole other games, making this one a far weaker value overall.