The first confirmed cases of coronavirus disease 2019 (COVID-19) in the US and in Europe were confirmed in January, 2020; the former in Washington, and the latter in France. Other cases quickly followed in other parts of the US and several other European countries such as Germany, Italy, and the UK. Since the initial testing criteria had been narrow, the virus spread via cryptic transmission in January and February, thus setting the stage for the first wave experienced in March and April, 2020.

To analyze this cryptic transmission phase and the first wave of the pandemic that ensued, researchers from Italy, UK, and the US used a data-driven, spatial, stochastic, and age-structured epidemic model. They developed a mechanistic understanding of the evolution of the epidemic and estimated the time required for local transmission in various states and countries. The model developed by the team offers a statistical idea of SARS-CoV-2 introductions across European countries and many states in the US. The study is published on the medRxiv* preprint server.

The study measured the association between the extent of domestic and international air travel and estimated the virus arrival times in the US and Europe. They showed that domestic and international travel patterns were a main driver in the establishment of local transmission of SARS-CoV-2. Moreover, the model was also used to estimate the COVID-19 disease burden across the US & Europe.

The study provided model estimates for the infection attack rates and infection fatality ratios as of July 2020. The results showed that the model-estimated infection attack rates agree with the results of serological studies on SARS-CoV-2 antibody prevalence at different spatial resolutions, including city, state, and country. The model highlights a strong statistical association between the estimated number of infections at the end of the first wave and the number of cases at the time of implementing major mitigation policies in each state or country.

The study used a global metapopulation epidemic model to offer a mechanistic understanding of the global dynamic behind the establishment of the pandemic in the US and Europe. The model used in the study is calibrated on international case introductions at the early stage of the COVID-19 pandemic.

Although the modeling results should be interpreted cautiously in light of the assumptions and limitations inherent to modeling approaches, they are of interest in combination with sequencing data of SARS-CoV-2 genomes to reconstruct in greater detail the early epidemic history of the COVID-19 pandemic.”

The study’s findings show that widespread community transmission of SARS-CoV-2 was likely in many areas of the US and Europe by January 2020. As per estimates, only 1−3 in 100 SARS-CoV-2 infections were detected by surveillance systems by early March. Modeling results suggest that international travel was the key driver of the introduction of SARS-CoV-2 with possible transmission events of the virus as early as December 2019. 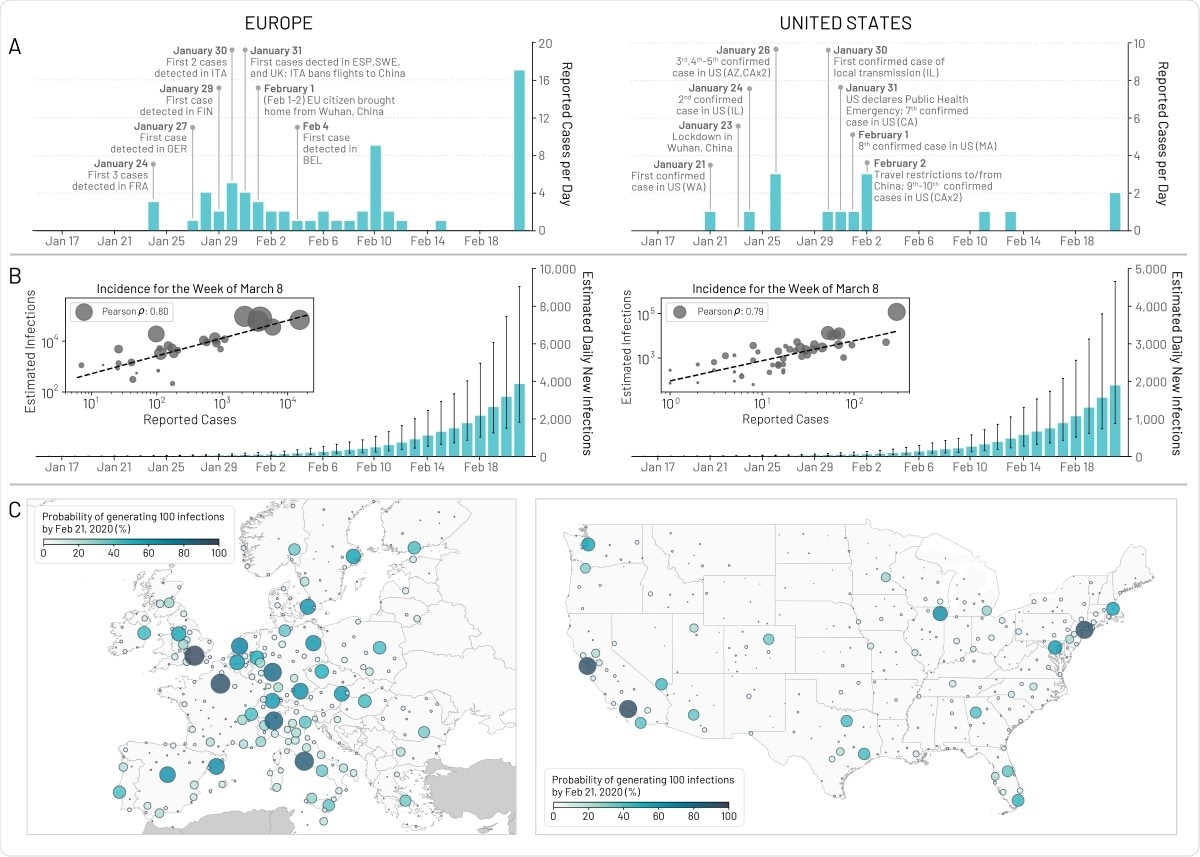 Early picture of the COVID-19 outbreak in Europe and the United States. (A) Timelines of the daily reported and confirmed cases of COVID-19 in Europe and US including information on initial reported cases and other significant events related to the outbreak. (B) Model-based estimates for the daily number of new infections in Europe and US. The inset plot compares the weekly incidence of reported cases with the weekly incidence of infections estimated by the model for the week of March 8 − 14, 2020 for the continental US-states and European countries that reported at least 1 case. Circle size corresponds to the population size of each state and country. (C) The probability that a city in Europe and the US had generated at least 100 cumulative infections by February 21, 2020. Color and circle size are proportional to the probability.

The researchers also described the resultant heterogeneous spatiotemporal spread of SARS-CoV-2 and the disease burden of the first wave during February to July 2020. Infection attack rates found in the study ranged from 0.19% to 13.2% in Europe and 0.78% to 15.2% in the US. According to the researchers, the spatial modeling of SARS-CoV-2 introductions and transmission offers insights into the design of model-driven surveillance systems and preparedness plans that have a broader initial capacity and indication for testing. The estimated viral importation patterns and the cryptic transmission phase dynamics may help in planning and developing public health policies related to international travels.

The estimated SARS-CoV-2 importation patterns and the cryptic transmission phase dynamics are of potential use when planning and developing public health policies in relation to international traveling and they could provide important insights in assessing the potential risk and impact of emerging SARS-CoV-2 variants in regions of the world with limited testing and genomic surveillance resources.”

Contamination of Some J&J Vaccines May not Impact U.S. Immunization Objectives, Officers Say