Because it is a novel pathogen, very little information is available on the period of infection-induced immunity caused by SARS-CoV-2. Although several reports on the reinfection of SARS-CoV-2 recovered patients are available, these are rare occurrences. In most cases, the protection lasts for at least 6-8 months, post-COVID-19.

Scientists believe that for developing the most effective strategies to contain the current COVID-19 pandemic, understanding the population-level immunity dynamics, induced via vaccine or infection, is of utmost importance.

Researchers have reported that, in the United Kingdom, each year, seasonal human coronavirus (HCoV) peaks during January-February. Even though several studies have indicated that reinfection of seasonal HCoVs occurs within a year, some studies have observed that for certain individuals, immune protection lasts for a longer period.

Additionally, researchers have also found that these antibodies are also effective against homologous strains of HCoV-229E, for approximately a year. Similarly, cross-protective immunity is also present between seasonal HCoVs and SARS-family coronaviruses. Researchers have analyzed human sera from SARS-CoV-2 patients and found a high IgG reactivity to seasonal HCoVs and low reactivity to SARS-CoV-2. Further, cross-reactive T-cells against SARS-CoV-2 have been reported in 20% to 51% of healthy individuals, owing to seasonal coronavirus infection. Such cross-reactive T-cells are mostly found in children and adolescents. This explains why children and adolescents are less prone to SARS-CoV-2 infection. Thereby, cross-protection from seasonal HCoVs has helped somewhat shape the epidemiology of SARS-CoV-2.

A new study has been published on the medRxiv* preprint server, which hypothesizes that cross-protection from seasonal epidemics of HCoVs could not only affect SARS-CoV-2 transmission but also protect children from the disease. To evaluate the pre-pandemic distribution of immunity to HCoVs, researchers have used six years of seasonal coronavirus surveillance data from England and Wales and fed it to mathematical models, which estimate the period for which infection-induced immunity to seasonal HCoVs persists. Further, the researchers also determined the relationship of the cross-protection from seasonal HCoVs with age patterns during the first wave of the SARS-CoV-2 pandemic.

This estimation differs from the conclusions obtained in earlier research which included larger data from Michigan, where strain-specific reinfection was observed between nineteen- and thirty-three months post-infection. Another report from Kenya showed reinfection within six months. Previous studies showed coronaviruses, such as SARS-CoV-1, can provide immune protection up to eleven months post-infection. 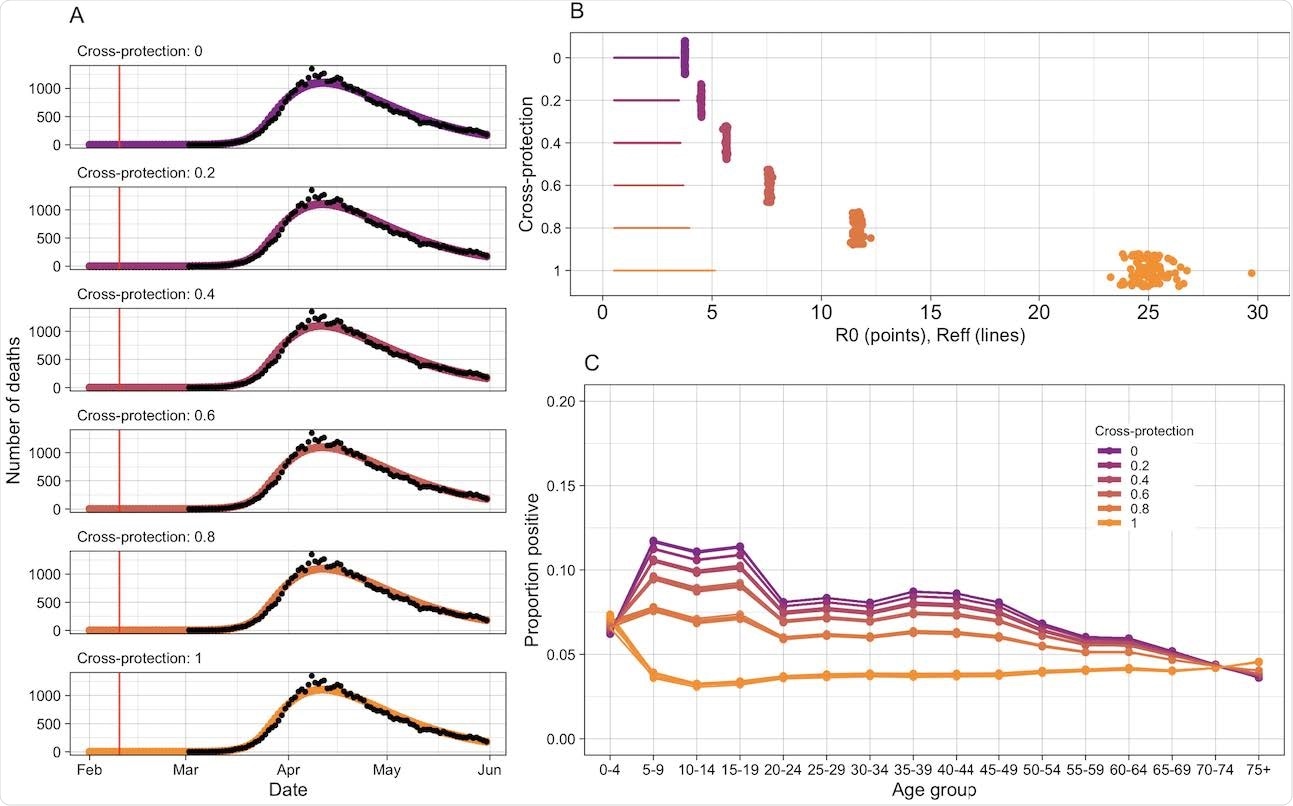 SARS-CoV-2 simulations A ) Fitted epidemic trajectories to d daily S ARS-CoV-2 deaths in 2020 in England and Wales. Each facet is a different strength of cross-protection and contains output from 1 00 simulations. The red line indicates the fixed date when SARS-CoV-2 i introduction starts. B) Estimated R 0 values for S ARS-CoV-2 with different strengths of cross-protection. P points display the R 0, C19 and lines show the range of R eff, C 19 during the simulation. C ) simulated age-specific serology rates for SARS-CoV-2 by the end of May 2 020.

As stated above, the current research concludes that cross-protection between seasonal HCoVs and SARS-CoV-2 is one of the reasons why children were less vulnerable to SARS-CoV-2 during the first wave in England and Wales. This observation agrees with previous research conducted in America, which revealed 50% of pre-pandemic donors possessed reactive T-cells to SARS-CoV-2. Further, these donors also had serological markers for a recent seasonal HCoV infection, which indicated seasonal HCoV was responsible for inciting cross-protective immunity.

Similarly, another study from Australia had reported 48% of uninfected candidates retained cross-reactive T-cells to SARS-CoV-2. The cross-reactivity showed a strong correlation with the memory of seasonal coronavirus strains. Even though antibodies are cross-reactive, their persistence varies from one individual to another and is short-lived when compared to T-cells. Researchers have identified cross-reactive immune responses in other pandemic coronaviruses.

The study reveals that cross-protection from seasonal coronaviruses, independently, cannot reduce susceptibility to infection in children. Several other factors might be responsible. Children produce a wide array of reactive antibodies that are not induced by common pathogens and contain different proportions of blood cell types. Also, multiple infections can enhance immunity due to cross-protection. On evaluating the strengths of cross-protection (i.e., strong or mild cross-protection between HCoVs and SARS-CoV-2), the researchers predicted a high chance that SARS-CoV-2 could cause annual epidemics or epidemics every couple of years.

The current study has assumed all seasonal HCoVs as one virus, and thereby, complete cross-protection exists between them. However, this assumption could lead to an underestimation of the actual duration of protection, because cross-protection may be strain-specific. Further, the researchers have assumed that over repeated infections, the strength of immunity to seasonal HCoVs is constant. However, in the case of recurrent infections by viruses such as the Respiratory Syncytial Virus (RSV), such an assumption could lead to a different evaluation of immunity. Researchers of the current study claim that a better understanding of commonly prevalent coronaviruses could help predict the progression of the COVID-19 pandemic.

Tremendous Ruin Bros. Final’s Subsequent Tournament Is All About… Hats?

Most countries are not fulfilling international legal...