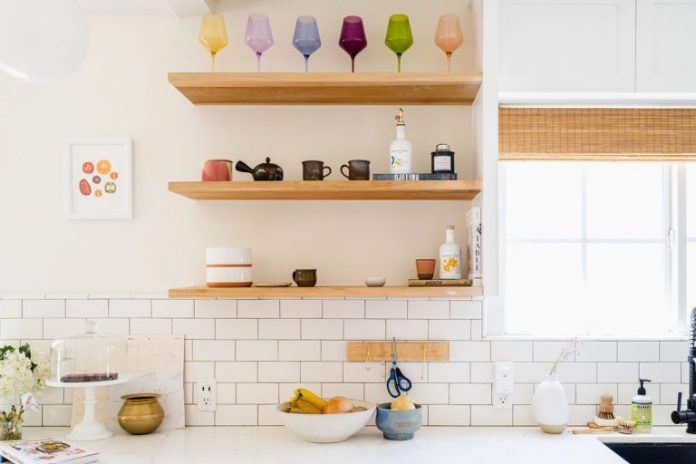 Is eating healthy more expensive? Let’s get this out of the way: healthy eating doesn’t have to break the bank. In fact, healthy eating can actually be cheaper than buying overly processed, additive-laden packaged food. Unfortunately, the general population believes that healthy equals expensive. But oftentimes, that’s not the case. So, why are we conditioned to think that healthy eating isn’t budget-friendly?

Part of the issue is that we confuse ‘healthy’ with other labels like organic and gluten-free. Just because a package of crackers (or artificial candy) is gluten-free, doesn’t mean that it’s nutrient-dense or inexpensive. The other issue is that healthy food can be associated with higher priced health-food stores. In reality though, a healthy diet is built on whole, unprocessed foods (think fruit, beans, nuts, etc.) which can be found very affordably at most grocery stores.

Sign up to receive a FREE E-BOOK of my top 10 most popular recipes of all time!

While yes, a Big Mac is cheaper than a pasture-raised burger and a gas station soda is cheaper than an organic vegetable juice, the same notion works in reverse: a fried chicken sandwich is more expensive than a banana.

Different foods cost different prices—not all healthy food is expensive and not all unhealthy food is cheap. This misunderstanding poses a risk to our overall health and wellness.

Social Inequities in Our Food System

All of that said, health and social status are inextricably linked. Systemic health and social inequities disproportionately affect racial, ethnic, and poor minorities. Meaning, conventionally-grown ingredients are more likely to be consumed by these groups (due to factors like price, accessibility, and knowledge). Ultimately, this means that low-income households are amongst the highest to consume processed foods and fast food.

In essence, accessibility is one of the most difficult pieces of the puzzle. Access to healthier options—as well as access to accurate education around healthy eating—is polarizing.

According to the 2012 USDA report, some research suggests that neighborhoods consisting primarily of low-income minority ethnic groups have limited access to supermarkets compared with wealthier, predominantly white neighborhoods. More and more studies indicate that food deserts are now up for debate. As the Scientific American reports, since the areas aren’t completely absent of food, some believe a more accurate description would be to specify them as “fresh food deserts” or “health food deserts.”

But while the researchers debate over semantics, it’s safe to say that as an entire ecosystem—from farm to corner store or supermarket—we have a long way to go.

Interestingly, research indicates that the world’s wealthiest countries (indicated by GDP) are not necessarily the healthiest (indicated by life expectancy). Blue Zones are identified as having the longest life expectancy and greatest longevity. A few of these cities are Ikaria, Greece, Okinawa, Japan, and the Nicoya Peninsula in Costa Rica. What is common in these areas, though, is what they eat: minimal animal protein, whole grains, fresh vegetables, fruits, olive oil, seeds, and nuts. In other words, economical food.

How can eat healthy on a budget?

There are a variety of ways to stick to your budget while still creating nutritious, flavorful recipes. Contrary to popular belief, it is possible to keep your grocery bill low while still fueling your family with nutrient-dense food. Ultimately, it comes down to planning, comparing options, and knowing what’s the best bang for your nutritional buck.

Planning your meals can help you avoid buying packaged items you don’t need or fresh veggies that might go bad. Meal planning also helps you avoid eating out on a regular basis. Find a couple of recipes to make (breakfast, snacks, and dinner sides), check your pantry to see what you already have on hand, then make your grocery list.

By planning, you’ll spend less money and waste less food. Plus, meal planning ensures your fridge is stocked ahead of time. Win, win.

Between e-commerce stores like Thrive Market and Brandless, it’s always helpful to spend a few minutes comparing prices. You can also sign up for grocery store apps (like Sprouts) to see what’s on sale. Doing a bit of homework can help you stay within your budget. Another way to compare is by thinking about serving size.

Speaking of sweet potatoes, buying in bulk can be more economical. In essence, buying in bulk is cheaper because it costs the manufacturers less to sell the item in larger quantities. I love buying ingredients like nut butter, lentil-based pasta, olive oil, and organic meat at Costco. Some of the cheapest ingredients to buy in bulk are beans, rice, frozen vegetables, and bananas.

As a helpful rule, first shop the perimeter of the store. This will make you more likely to fill your cart with fruits, veggies, and protein. In other words, whole foods.

While processed foods tend to be less expensive than most fresh foods, that is because the U.S. government subsidizes the producers of those main ingredients (i.e. corn and wheat). In turn, that helps keep crop prices low. However, processed foods and many packaged foods have added sweeteners and higher fat content, along with sodium and other preservatives. Whole foods, on the other hand, contain a vast array of nutrients—like vitamins, minerals, and fiber, that your body needs to function optimally.

Typically just as nutritious as their fresh counterparts, frozen fruits and veggies are less expensive and available year-round. Picked and packaged at their height of ripeness, freezing seals in nutrients (and flavor). With the shelf life being much longer, you can prolong the frozen fruit or veggie’s use. Frozen produce is usually sold in large bags, allowing you to use only what you need and keep the rest in your freezer.

While buying frozen berries in the winter is an easy way to consume immune-boosting antioxidants, buying fresh berries in the summer also does the trick. In other words, buying frozen fruits and veggies during their off-season is just as advantageous as buying that same produce during peak harvest. Eating with the seasons is more economical. When produce is in season, there is an abundance. In turn, it’s available at a lower price.

Produce grown close to home costs less money to transport, culminating in a lower overall cost at purchase. Plus, when you support local farmers and growers, that money stays in the community and subsequently helps stimulate local economies.

This post was originally published on June 28, 2021, and has since been updated.

50 Fun and Festive Things to Do

41 Unique Gifts for Readers of All Types