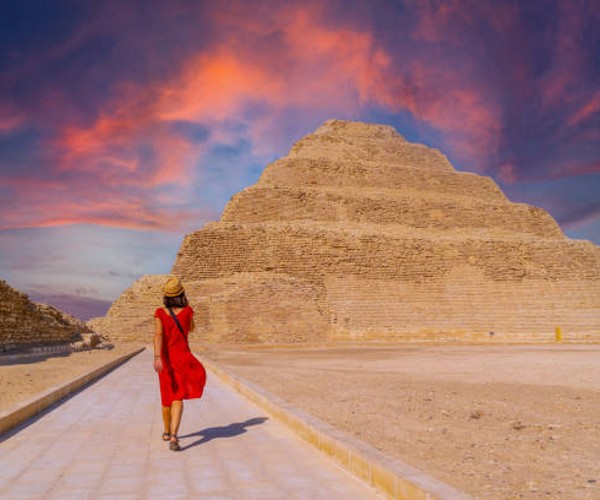 Djoser, also spelled Zoser, was the second king of Egypt‘s third dynasty (c. 2650–c. 2575 BCE), and he managed the construction of Egypt’s first significant stone building. His reign, which lasted probably 19 years, was characterised by significant technological innovation in the use of stone architecture. Imhotep, his minister and a gifted architect and physician, was later deified.

The king constructed a funerary complex at Saqqara, outside the royal capital of Memphis, with the assistance of Imhotep (southwest of modern Cairo). The innovative structure was built entirely of stone, a departure from the traditional use of mud bricks in conjunction with stone. The most significant advancement, however, was a complete transformation of the monument’s shape from a flat-topped rectangular structure (known as a mastaba) to a six-stepped pyramid. Surrounding the Step Pyramid were a slew of limestone structures meant to represent royal ritual shrines. The architecture of those buildings replicated in minute detail the wood, reed, and brick forms used in utilitarian construction in Egypt.

Egyptian Tourism and Antiquities Minister Khaled al-Anany launched a project to rehabilitate King Djoser’s south tomb in Saqqara on Monday 13th of September , carrying out work that began in 2006, and included work on the lower corridors, strengthening the walls and ceilings, finishing the interior inscriptions in the tomb, and reassembling the granite coffin.

The south tomb of King Djoser, a pharaoh who lived more than 4,500 years ago, is located in the southern corner of his burial complex in the Saqqara antiquities area, according to Mostafa Waziri, Secretary-General of the Supreme Council of Antiquities.

However, the pharaoh was not buried there, but rather in the nearby Step Pyramid. The two structures are part of the Saqqara complex near Cairo, which is one of Egypt’s most important archaeological sites. According to the United Nations Educational, Scientific, and Cultural Organization, or UNESCO, the Step Pyramid is the oldest known pyramid and one of the first examples of monumental architecture from the ancient world. It is thought to have served as the inspiration for the Giza Pyramids.

Dr. Khaled Al-Anany met a number of tourists from Germany, Brazil, Russia, America, Spain, the Caribbean Islands, Poland, and Portugal, all of whom were eager to speak with him about their love for Egypt and its tourist spots, as well as what they perceived of Egypt’s greatness and nobility. The Minister of Tourism and Antiquities, for his part, invited them to the cemetery’s inauguration ceremony. The tourists were overjoyed at the invitation, as they were the first visitors to the cemetery in over 15 years.

The Saqqara plateau is home to at least 11 pyramids, including the Step Pyramid, as well as hundreds of tombs of ancient officials and other sites dating from the 1st Dynasty (2920 B.C.-2770 B.C.) to the Coptic period (395-642).

The Saqqara site is part of the necropolis of Egypt’s ancient capital of Memphis, which also includes the famous Giza Pyramids and smaller pyramids at Abu Sir, Dahshur, and Abu Ruwaysh. In the 1970s, the Memphis ruins were designated a UNESCO World Heritage site.

According to Dr. Khaled Al-Anany, the tomb is divided into two sections: the upper portion is a limestone terrace with a frieze decorated with cobra snakes.

A well at the end of a burial chamber with a huge pink granite sarcophagus, similar to the burial chamber in the Step Pyramid, can be found in the tomb.

There are also many long corridors with fake doors bearing the image of the king and his titles, and the walls are decorated with blue faience pieces.

The initiative to restore the tomb, according to engineer Hisham Samir, began in 2006 and comprised engineering, geotechnical, geo-environmental, and archaeological examinations of the tomb.

The lower passageways were restored, the walls and ceilings were strengthened, fractures were filled, and faience tiles were installed to complete the tomb’s internal elements.

In addition to reassembling and restoring the granite sarcophagus at the bottom of the burial well, the cemetery was rehabilitated for visits by paving the floors, installing the ladder leading to the well and the tomb, and fully lighting it. 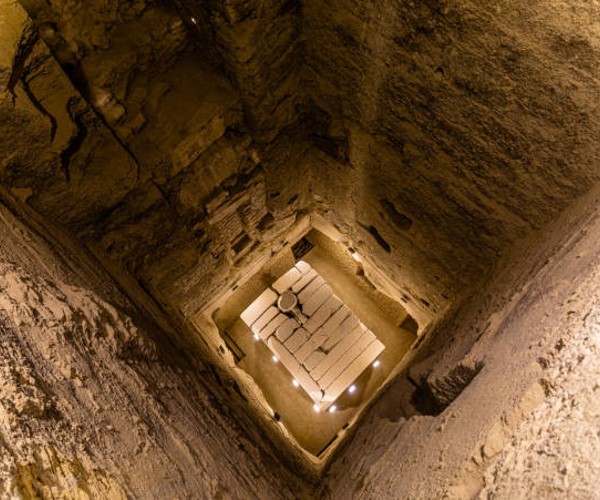 The tomb was opened for visitors on Tuesday, with entrance fees costing LE 40 for Egyptians, LE 20 for Egyptian students, and LE 100 for foreigners and foreign students.

The entrance to the south tomb, the well to its end, and the sarcophagus are all included in the tour.

Egypt has made a number of recent archaeological discoveries public in an effort to revitalise its key tourism sector, which was severely harmed by the turmoil that followed its 2011 uprising. The COVID-19 pandemic also dealt a further blow to the industry.