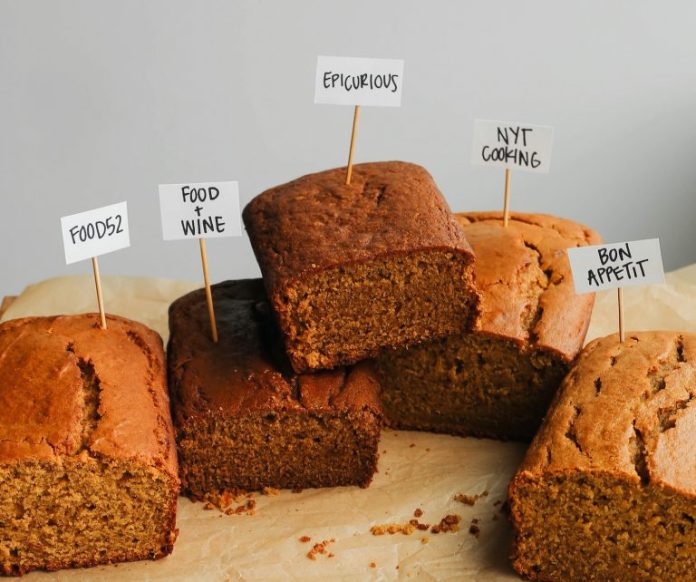 Thanks to this bake-off, my year has officially peaked. Like many, I’m a pumpkin bread fiend. At the sight of the first falling leaf, I’m ready to break out my flannel and toss pumpkin spice around like confetti. Something I’ve always wanted to do was to uncover the best pumpkin bread recipe on the internet to find out once and for all if there really is a difference between them.

To be fair, if you look at the ingredients between most recipes, it’s hard to imagine there would be a difference. They all include some variation of flour, sugar, spice, pumpkin, and eggs. So given all the extra time on my hands these days (and an extra craving for comfort with the drop in temperatures), I decided it was time to determine which of these popular internet recipes is truly: the ultimate pumpkin bread.

For this bakeoff, I stuck to well-known food publications that are reliably great recipe sources. And after polling my friends, most have tried at least one of these recipes. (I linked to a few of my favorite pumpkin bread recipes from a few favorite bloggers and bakers below as well!)

Here’s how the bake-off shook out, should you want to host one of your own (I highly recommend, btw):

Some of the recipes I baked ask for optional toppings or mix ins, but for the sake of comparison, I wanted a clean slate.

As someone who spends a lot of time in the kitchen, I’m used to taking a few liberties and inserting my own interpretations of recipes. However, for the sake of this bake off, I stuck to the exact directions as written. That meant even if I disagreed with the method or measurements, I ignored my personal opinions to follow the recipe exactly.

In the spirit of continuing to find fun and inventive ways to socialize with friends during this season, I invited a few friends to participate in a social distanced pumpkin bread tasting. My taste testers, my foodie friend Kristin, her husband Mark, and my friend Ka all had different expectations for what they thought made for the “perfect” pumpkin loaf, so I used their feedback to help guide my decisions. Testers said that a pumpkin loaf should be different than a banana bread, being slightly moister and having a nice crust in addition to a nice pumpkin flavor. The ranking below, is MY personal decision based on what I look for in a pumpkin loaf slice, aka, the perfect loaf.

To be fair, all of the loaves I baked were good and I would be content baking any of them again with some minor tweaks here and there. It really came down to the small differences that made some recipes better than others.

So without further ado, here is my ranking and the winner of my pumpkin loaf bake off!

Pros: A very well defined crust and was surprisingly moist for days after baking. Would be nice with coffee.
Cons: A little too sweet for me, and despite the spices in here, I didn’t get much flavor other than sweetness.

This was the densest loaf that didn’t quite achieve the rise that the others did. Unfortunately, I could barely taste any of the spices as all I got was an overwhelmingly sweet flavor. Some of my testers enjoyed the flavor a bit more, calling it “molasses-y”, which if you like that kind of flavor is nice. I didn’t realize until I was getting ready to bake, but this recipe actually makes two loaves. Which hey, is great if you’re down to bake a loaf for yourself and another to deliver to a friend. The recipe also calls for (optional) chopped walnuts. Perhaps I would have liked this one more if it had the added texture of the walnuts and punched up the spices a lot, but overall, this one was only average and ranked the lowest among the group based on flavor.

Get the Epicurious recipe here.

Food52 says “Pumpkin bread should be quick to come together, confident in pumpkin flavor, and moist as can be”, all things I was looking for in a pumpkin bread. This was the one recipe that I did not use a stand mixer for, as in their directions, Food52 has you add the wet ingredients into the dry ingredients in just a bowl (a technique I was also surprised by as I’m used to adding dry ingredients in parts to wet ingredients) but again, I was following these recipes to a T. This was also the ONLY recipe to ask for Pumpkin Pie Spice rather than individual spices. Taste testers did like the pumpkin-y flavor here as well. I was super impressed with the bake and rise on this loaf as I brought it out of the oven as well. I actually didn’t mind this loaf, but was slightly disappointed as this was the driest crumb of all the loaves. The crumb did not improve in moistness the following days either. Perhaps I would try baking five minutes less than the written directions next time to see if that helps maintain a bit more moistness in addition to punching up the spices. I would have ranked this one higher if it had only delivered on its moist loaf claim.

Get the Food52 recipe here.

I actually didn’t mind this loaf on its own! If I wasn’t comparing this loaf to others, I would be totally content with a slice of this pumpkin bread. My friend Kristin even ranked this one as her number one loaf and “the loaf I would want to eat my my morning cup of coffee”! HOWEVER, this recipe only calls for 1 cup of pumpkin. My biggest pet peeve with any pumpkin recipe during the season is if I can use the whole can of puree or not. It also resulted in the pumpkin flavor being very faint. The texture on this loaf is really nice though, it was the only loaf to rely on the creaming method of beating the butter and sugar together which added some nice lightness to the loaf. In the end, this was just a good, basic pumpkin bread recipe. Not disappointing, but not show-stopping either.

Get the Food and Wine recipe here.

Pros: Great flavor, great crust.
Cons: Could have a slightly moister crumb given the use of olive oil. Longest bake time.

This loaf caused the most conversation of the bunch and it was a close call between having this one be ranked #1 or #2.. Some of my tasters loved this one – my friend Mark said this loaf had the best texture of the bunch – but others ranked this one in the middle of the road based on flavor. Personally, I liked this loaf for a few reasons. It had the most complex flavor among the loaves, leaning on fresh grated ginger and heavy on the spices, in addition to the use of olive oil. It was the most artisanal of the group. My friend Ka didn’t love that the olive oil took away from the flavor of the spices and pumpkin, so my recommendation on this loaf is to ensure that you use really good olive oil because you will be able to taste it. The rise on this loaf was great as well. Some taste testers wanted slightly more moistness from the loaf, but agreed that the complexity in flavor made up for it.

Get the Bon Appétit recipe here.

And our winner came from NYT! What set this loaf apart from the others was the texture that was miles apart from the others. It’s the sour cream in this loaf that really adds to the moist texture while also cutting through the sweetness from the very slight tang. This loaf also had the truest and purest pumpkin flavor. However, that is most likely from the fact that this loaf only uses cinnamon as its spice which was the only callout from testers that all asked for more spices in this one. As someone who also likes to taste lots of spice, I will definitely add extra pumpkin pie spices to the batter next time I bake this one. The loaf stayed moist for days and even a week later which was truly impressive and made for a great morning coffee treat. I would recommend baking for five extra minutes if you prefer a loaf that’s a bit more cakey rather than moist, but overall, this loaf ranked high and won for its texture and pumpkin flavor.

And for all my friends saying they can’t find pumpkin on the shelves of the grocery store, know that you can sub in sweet potato puree or butternut squash puree and you’ll barely be able to tell the difference.

If you’re in search of some different pumpkin loaves, here are a few more that I have made and loved as well:

This post was originally published on October 12, 2020, and has since been updated.